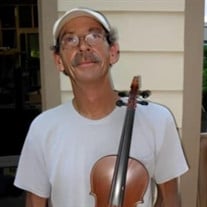 William Lowell Smith Jr. (Bill) In the early morning of March 7th, Bill passed from this life to the next, in the home he built with his wife, Wendy, by his side. He was born in January of 1953, to William Lowell Smith and Jacqueline Linger Smith. Bill was a musician, boat builder, electrician with the IBEW, welder, violin maker, pilot, home builder, inventor; in short, a true Renaissance man. Bill has been a member of the music scene since he was 12 years old, first appearing with the Traditions Children. He was a guitarist for many notable bands including: Easy People, Moonshadow, Out on Bail, Quarter Moon and many others. Often he made guest appearances with Uproot Hootenanny, when his nephew, Brian, was playing in the area. His last appearance was with his daughter, Rachel and granddaughter, Jackie at the Farm to Grass Festival. Bill was fortunate to work with Gary Stewart and opened for Charlie Daniels. If he were in-between bands, he had a fabulous one man show that drew crowds in his 20’s and 30’s. Perhaps, we will most remember the many years of Saturdays with Moonshadow at Pineapple Joe’s. Bill was very comfortable sailing the 54 foot Sarah up and down the Indian River, until her retirement to Key West as a Sunset Cruise Ship. Many of us enjoyed those halcyon, idyllic voyages. There really wasn’t anything Bill couldn’t do, as his friends well knew. He was a perfectionist when it came to building boats, houses, and furniture. He even restored a Stearman biplane with his friend Dave. Interestingly, once completed, he was content to fly it one time and move on to his next project. Bill’s last endeavor, after his cancer diagnosis, was to restore a boat he had built earlier, Lahoma, and sail it to its berth in Vero. Extemely fortunate in life, Bill had Wendy for his wife, friend, first mate, and partner to all his building ventures. Bill is survived by his wife of 40 years, Wendy Kastner, his beloved daughters, Tina (Steve) Anderson and Rachel Smith; his sisters, Sharon (Harry) Alexander and Dr. Claudia (Pip) Trew; his granddaughters, Valkyrie Southers and Jackie Hare; three great-grandchildren; and many nieces and nephews who adored him.

William Lowell Smith Jr. (Bill) In the early morning of March 7th, Bill passed from this life to the next, in the home he built with his wife, Wendy, by his side. He was born in January of 1953, to William Lowell Smith and Jacqueline Linger... View Obituary & Service Information

The family of William Lowell "Bill" Smith Jr. created this Life Tributes page to make it easy to share your memories.

In the early morning of March...

Send flowers to the Smith family.