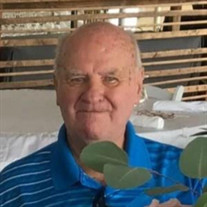 William (Bill) J. Mooney Jr., 84, passed away suddenly on Monday, January 17, 2022 at his home in Port St. Lucie, Florida. William was born on March 13, 1937 in Albany, NY to William J. Mooney Sr. and Anna Frances Kernan. Bill graduated high school from Vincentian Institute in 1955. He went on to serve in the United States Coast Guard before moving on to work for the State of New York where he met his future wife. Bill then worked for the United States Postal Service until retirement. Upon moving from New York to Florida, he worked for the City of Port St. Lucie as a crossing guard. He married Antoinette Carusone on July 22, 1961. Together they raised four sons and one daughter. Bill loved the game of baseball and, more specifically, the Mets as he often found himself at the ballpark in Port St. Lucie. He was a member of the Elks Club for over 40 years combined between Colonie, NY and Port St. Lucie, FL. He also founded the Albany Club, which met once a month, for St. Lucie residents that had moved from Albany, Schenectady and Troy, NY. Bill enjoyed reading and retaining all the information and facts he could, no matter how quirky or useless it may have seemed. He was a walking trivia game that made you feel as though you knew nothing, all while, somehow, turning right around and making you feel like the most special person in the world. His intelligence allowed for a witty sense of humor that would always produce a room full of laughter, smiles and eye rolls. He taught his family that beauty didn’t only come from Raphael, Michelangelo, Donatello and Leonardo, but beauty was also a perfectly executed 4-6-3 double play, or a hit and run that moves the runner from 1st to 3rd. Between his five children and eight grandchildren, he found ways to make weekly phone calls to everyone to check in on them, give out both valuable and almost completely useless information, tell a joke or two, and make them smile. If his call went to voicemail, he would request his patented “Cell Yell” in return, leaving them with at least a smirk until they spoke again. His love for his wife, children, grandchildren and great grandchildren knew no bounds. William went out of his way to take an interest in his family members’ interests to the point of seeming even more interested than they were. He had a knack for using his passions and strengths to help those around him to grow as students, intellectuals, athletes and human beings. He made you believe that the sky was the limit and you could accomplish anything your heart desired. He was proud of his family and took pride in making his family feel proud of themselves. He was able to make you feel beautiful inside and out, and he was able to do it so effortlessly because, he, himself, possessed those very same qualities. William was a great man, son, husband, father, grandfather and great grandfather who served his country and his family well. William is survived by his wife Antoinette; son and wife Patrick and Stacey Mooney, son Joseph Mooney, son and wife Peter and Michelle Mooney, son and wife Michael and Colleen Mooney, daughter Anna Giordano; grandson and wife Michael and Cierra Mooney, granddaughter and husband Erin and Kiernan Scanlon, granddaughter and husband Ashley and Jason Mooney, grandson and wife Peter and Ashley Mooney, granddaughter and husband Kailyn and Jamie Bray, grandson Marcus, granddaughters Courtney and Jillian; and great grandchildren Emma, Kiernan, Merrick, Elle, and Colton. William was preceded in death by his parents, William Sr. and Anna Frances Kernan; and son-in-law Salvatore Giordano. Funeral services will be held January 28, 2022. Mass will be held at 11:00am at: St. Lucie Catholic Church 425 SW Irving St. Port St. Lucie, FL 34983. Mass will be followed by a Celebration of Life at 12:30pm at: Haisley Tribute Center 2041 SW Bayshore Blvd. Port St. Lucie, FL 34984

The family of William J. "Bill" Mooney Jr. created this Life Tributes page to make it easy to share your memories.

Send flowers to the Mooney family.