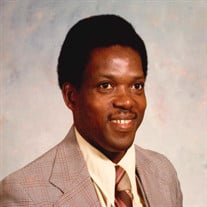 William Victor Allen was born March 14,1943 on the beautiful island of Montserrat West Indies. He was born to the late Richard Allen and Susannah (Lucy) Farrell. He migrated to Boston in December 1969 to join his wife and start a family. William worked at State Bank and Trust for over thirty years and held the title of Assistant Vice President, Mutual Funds IT at the time of his retirement. William lived in and around Mattapan and Randolph, Massachusetts before relocating to Florida in 2003. William joined the Greenwood Memorial United Methodist Church. There he served in various roles as Treasurer, Chairperson of the Finance Committee and various other church committees. After many years, he and Evlyn joined the Parkway United Methodist, where he once again served on finance committee. After relocating to Florida, he continued with in the church in similar roles. After a short battle with a very aggressive cancer, William went home to be with his Lord on January 21, 2021. William joins his father Richard, mother Susannah, brother Leroy and his sister Margaret. He is survived by his beloved wife Evlyn Allen; his children Lester, Ronald and Cherise; his grandchildren Victoria and Nolan; his brother Owin (Lennox) Farrell, five sisters: Margaret Farrell, Rosanna Farrell-Lynch, Venereen Athill, Oslyn Brumant and Eleanor Farrell-Lee. Brothers in-law John Lynch, Denroy Athill, Keith Brumant and Kevin Lee. Sisters-in-law Delmaude Farrell, many nieces and nephews and numerous cousins and friends, including but not limited to his best childhood friend Joseph Lynch in Montserrat. William will be greatly missed by those who had the good fortune to know him. He was devoted to his family and community, always looking to give back and lend a helping hand to those in need. His was a beloved husband, father, brother, uncle, cousin and friend. Those he leaves behind love him very much and will miss him. May he rest in peace and be forever in your hearts. Visitation will be held on Saturday, January 30, 2021 from 10:00-11:00 AM with a service at 11:00 AM at First United Methodist Church, 260 SW Prima Vista Blvd, Port St. Lucie, FL 34983. Burial will take place at Oaklawn Cemetery, Boston, MA.

William Victor Allen was born March 14,1943 on the beautiful island of Montserrat West Indies. He was born to the late Richard Allen and Susannah (Lucy) Farrell. He migrated to Boston in December 1969 to join his wife and start a family.... View Obituary & Service Information

The family of William Victor Allen created this Life Tributes page to make it easy to share your memories.

Send flowers to the Allen family.