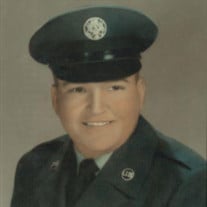 Wallace Andrew Peco “Wally” passed away February 7, 2022 in Port St. Lucie, Florida. Wally was born March 17, 1937 in Hammond, Louisiana to Bernard and Nellie (Montet) Peco. After High School, Wally joined the United States Air Force. While stationed in Germany, he met Margareta Hansen and they were married on March 15, 1958. He received an Honorable Discharge from the Air Force on February, 1966 at Castle Air Force Base in California. After his discharge he worked as a Ticket Agent for Delta Airlines until his retirement in 1993. Wally and Margaret were square dancers and traveled Florida with their Square-Dancing Group performing at special events. The couple loved to travel; spending years traveling the country in their RV. Wally always had many stories about their extensive travel along with lots of memorable pictures. Wally was an artist and he loved painting scenes on saws and milk cans. He was also known to be excellent at drawing caricatures. Wally was a collector of many things over the years, including pocket knives and old-style cameras. He was constantly saying “I am going to clean up the garage and get rid of stuff” but he just kept collecting. His love of pocket knives led to a wide collection and he was always trying to give one to family and friends. Wally was one of those guys that just loved to be out in his garage working on an art project or just tinkering around with his cowboy hat on. Survivors include beloved wife, Margareta of Port St. Lucie, Florida; Daughter, Theresa Stipcak and Spouse, Leonard Stipcak of Port St. Lucie, FL; Son, David Peco and Spouse, Penny Andrus Peco of Lady Lake, Florida; Grandchildren: Kandice West, of Port St. Lucie, FL; Ashly Bush and Spouse, Jeremy Bush of Deltona, FL; David Peco, Jr. and Spouse, Harley Peco of Lady Lake, FL; Dylan Peco and Spouse, Destinee Peratos of Ocala, FL; Great Grandchildren, Hailey Drew West, Lily Connors, Alexa Connors, Ivelia Jeanne Bush, Andrew Peco, Arya Peco, Athena Peco. He also leaves behind Sister-in-law, Marge Smoot Peco of Maitland, FL. He will also be missed by Nephew, Peter Peco and Niece Kathleen Meyer, whom he was also very close, as well as a many other nieces, nephews, grandnieces, and grandnephews. Wally was predeceased by his Father, Bernard Peco; Mother, Nellie Montet Peco, Hammond, LA; Brother, Peter Peco; Sister, Georgia Russo, deceased spouse, Carmen Russo. A visitation will be held on Friday, February 11, 2022 from 2PM – 3PM with a service to start at 3PM at the Haisley Tribute Center 2041 SW Bayshore Blvd Port St. Lucie, Florida 34984.

The family of Wallace "Wally" Peco created this Life Tributes page to make it easy to share your memories.

Send flowers to the Peco family.