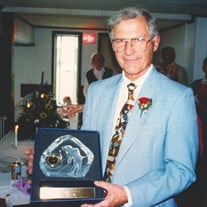 Thomas John Micek, "Tom or Tommy", age 87, died Monday, August 16, 2021 at Hospice House in Fort Pierce, Florida. He was born on November 11, 1933 in Utica, New York, one of three sons of the late Frank Micek and the late Mary (nee: Kroll) Micek. Tom married Patricia Joy Hart November 10, 1967 in Eastpointe, Michigan. He is survived by his beloved wife of almost 54 years, Patti, who resides in Port St. Lucie, Florida and brother Paul who lives in Huntington, Oregon. He was predeceased by his parents and brother Frank. Tom attended Fort Lauderdale High School in Florida and graduated with the school's 1951 class. While in high school he played football, but golf was always his #1 passion. He was a star player on the "Flying L's" golf team which rarely lost a match against teams from rival high schools. It was during his high school years that Tom managed to sneak some time away from the golf course to take art lessons. He received recognition locally for his beautiful, finely-detailed pencil drawings. Tom was happy to show some of his works to people who asked to see them, but golf remained his #1 interest. He hoped to become a golf professional some day and knew he would have to work very hard on his game to make that happen. Following high school, Tom served two years in the United States Army, stationed at Selfridge Air National Guard Base near Mount Clemens, Michigan. (Tom loved to tell the story of when his Army golf team defeated the Air Force's team, in a very competitive match, on the Air Force's home base!). And to prove it, he had pictures of Col. William Henry, Base Commander, presenting the trophy to the Army team!) After his discharge from active duty, Tom went on to serve two years in the Army Reserves in Ramsey, New Jersey. In 1960 Tom was inducted into the Professional Golfers' Association of America (PGA). Over the next twelve years, he was employed as a PGA Assistant Pro to some notable names in the game of golf at that time including Walter Burkemo, Ted Kroll, Mike Krak and Lew Worsham, garnering valuable experience for the day when he would have his own club. That day came in 1972, when Tom was hired as PGA Pro at Lost Lake Woods Club in northern Michigan. He and wife, Patti, worked together for and with the many wonderful club members for 24 years. And they were good years. In 1973, Tom and the LLWC Golf Committee oversaw the opening of the second 9 holes at LLWC, making an 18 hole course that was more fun and more challenging to play than the original 9 had been. A new Pro Shop was built in 1977. Tom called the years that followed in the late 70's,"the growing years" for golf at LLWC. Many new events and tournaments were added to the golf schedules every season. Tom was happy to have had the opportunity to work with LLWC's Golf Committee in the initial planning of these fun events and watch them grow in popularity every year. Many of them continue to draw new players every season, even after all these years. Tom retired from LLWC in 1995. After wintering in Florida several years, he and Patti moved to the Sunshine State permanently in 2001. In his Florida retirement years, he played golf (no surprise there!), and did some gardening. (He supplied neighbors with more tomatoes than they could ever eat!) And he enjoyed helping Patti tend her orchids. A Memorial Mass for Tom will be held at Saint Lucie Catholic Church in Port St. Lucie on Monday, September 20th at 11:00. Following the Mass, his inurnment will be at the National Cemetery in Lake Worth, FL, with full military honors. Memorial donations are appreciated to the donor's choice, in Tom's name.

The family of Thomas J. Micek created this Life Tributes page to make it easy to share your memories.

Send flowers to the Micek family.