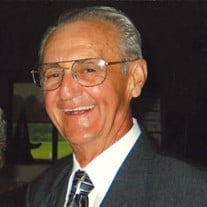 Tom Liverett 84, died September 30, 2021 in Fort Pierce, Florida. Mr. Liverett was born in Boaz, Alabama and resided in Fort Pierce, Florida at the time of his death. Tom joined the Air Force and served his country from 1954 to 1957 as a Jet Engine Mechanic and was Honorably Discharged in 1957 due to an injury sustained from an automobile accident. Tom married the love of his life, Patti Blackburn, in 1958. Tom and Pat moved to Illinois to begin their new life. Soon they were blessed with three children. Tom was a bricklayer by trade and was respected in his field. He consistently looked for ways to improve life for his family and always took them on vacations – to visit family or to go to amusement parks and attractions. He wanted to provide a memorable childhood for his children and succeeded. Tom was a devoted husband to his wife Pat for 62 years until she went home to be with the Lord on March 31, 2019. He was a hero to so many of his family and showed everyone the true meaning of love, marriage and what “in sickness and in health” meant through his care and compassion in the way he took care of his beloved Pat when she was diagnosed with Alzheimer’s. He faithfully took care of her at home for several years before she had to be moved to a nursing home. He never let a day go by without visiting her at the nursing home even when she no longer remembered him. He was a fierce advocate for Pat and always ensured she was cared for properly. His faithfulness to his wife made him a true hero in the eyes of his family. He was steadfast and devoted to his sweetheart. Tom has been a shining example to his family and taught them exactly what family truly is. Tom was a member of Riverview Baptist Church in Fort Pierce, Florida. He loved spending time at his church and served as a door greeter. Tom was a very social and independent individual who loved His Lord, his family, and his community. He enjoyed sitting in his driveway solving the world’s problems with his neighbors. Tom had several favorite restaurants he would frequent weekly (Airport Tiki Restaurant and Mrs. Mac’s Fillin’ Station). Tom never met a stranger. His idea of being on time and punctual meant you arrived an hour early. He was a man of his word and he expected everyone to honor their word. Tom never forgot his time in the Air Force and working on and being around planes. In the early 1970’s he earned his pilots license and bought a small engine plane. He loved taking his friends and family for rides. One of his favorite things to do was to fly to Wisconsin for breakfast or lunch. Even after he was no longer able to pilot his own plane, he still frequented the airport. After selling his plane he needed a new toy and bought his first Corvette. Tom loved planes and flying, he loved his cars and he loved to drive. Everywhere Tom went he shared his faith in the Lord Jesus Christ. Everyone in his community knows Tom’s new residence is now Heaven. He has been a shining example to so many on how to live a life and leave a legacy. Tom is a giant among men. Tom will be missed by his family and his friends but will continue to live on in the hearts of those who knew and loved him. Survivors include daughter-in-law, Gayle Liverett of Hudson, WI; daughter, Cindi Liverett of Park Forest, IL; son Greg (Leslie) Liverett of Montgomery, TX; granddaughter Aubrey (Adam) Reyzer of Prescott, WI; Amanda Liverett of Hudson, WI; Jordan (Wili) Liverett of South Chicago Heights, IL; grandsons Thomas (Elizabeth) Liverett of Tauranga, New Zealand; Kyle Girman of Griffith, IN; and Nicholas (Rebecca) Liverett of Denton, TX; great grandchildren Evan, Coraline, Ada, Miles, Brayden, Jackson and Liliana; brother Mike (Cyndi) Liverett of Channahon, IL; sisters Ophelia Flanagin of Albertville, AL; Marion (Harold) Wallace of Leesburg, FL, brothers-in-law Bill Pace of Taylor, MI, Jack Blackburn of Jackson, OH; Terry (Elaine) Blackburn of Canton, OH; sisters-in-law Sue McKenzie of Jackson, OH; Rudy Amagliani of Cooperas Cove, TX and numerous nieces and nephews. He was preceded in death by his wife Patti Liverett, his son Rodney Liverett, his sister Margaret Pace, his parents Reverend C.T. and Birtie Liverett, sister-in-law Gladys Blackburn and brothers-in-law Howard Flanagin, Clyde McKenzie and Gus Amagliani. Services: Visitation will be held Thursday, October 7, 2021 from 10am – 11am with a service to follow at 11am at Riverview Baptist Church, 4601 Old Dixie Highway, Fort Pierce, FL 34946. An additional visitation will be held on Saturday, October 9, 2021 from 10am – 11am with a service to follow at 11am at First Baptist Church of Albertville, 309 E. Main Street, Albertville, AL 35950. Burial will follow at Union Cemetery, Boaz, Alabama. The info for livestream will be for the service in Alabama and the link is Albertvillefbc.church This will begin at 11:00 AM Central Time. If someone is accessing that on a laptop or computer their will be a link at the top that says Livestream and just click on it. If they are on a phone they may have to click Menu, click Media, click Livestream.

The family of Thomas Liverett created this Life Tributes page to make it easy to share your memories.

Send flowers to the Liverett family.