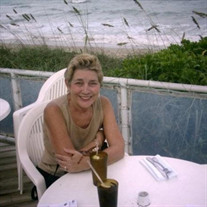 Therese Ann (Pritchard) Watta passed away at Life Care Center of Port St. Lucie on January 25, 2022 at the age of 86. She was born in Flatbush, New York, on November 11, 1935. Terry, as her friends and family called her, was a girl scout, got a scholarship to Our Lady of Mercy High School in New York. Terry loved to go to Coney Island and go on the parachute jump. She really enjoyed roller skating with her brother, Tom and sister, Jeanette. She played saxophone in the school band. Terry and her cousin, Barbara were also teenage models with the John Powers Agency. Her first husband and first love was Edward Clark. Terry met him in New York while he was in the Air Force. Terry moved to Kentucky with Edward and would give him two daughters, Donna and Joanna, before moving back to New York, then Maryland. After she separated from Edward, she moved to Florida. Her little sister, Jeanette, would bring her three daughters and one son. As a family, they lived together in a three-bedroom condo. The family had so much fun together. The kids, all six of them, would sing for their moms and grandmother. Since the families were the Cusacks and Clarks, the band of kids, took the stage name of Cularks. In Florida, she met and married the second love of her life, Frank Watta, who had three children from his first marriage. She cherished his young children, Sherry, Jennifer, and Douglas, as her own, and loved them all so much. She was the best mom that anyone could have ever hoped for, she worked so hard to always give her best to children. Terry loved being a Grandma, her love for her grandchildren, Danielle, Kyle, Conner, and Mariel, made her the best Grandma ever. They were the love of her life. Terry loved her family and being with them, especially Sunday dinners every week, the best times ever! Terry was such a smart and beautiful woman that anyone would want to aspire to be just like her. She overcame so many hard times raising two girls on her own and managed to provide a wonderful life for both of her girls. She is survived by her daughter, Donna Francavilla, son-in-law: John Francavilla; son-in-law, Douglas Houser; stepdaughters, Sherry Lutes (Jeff Lutes) and Jennifer Alvarez; sister, Jeanette Dmuchowski; brother, Joseph Pritchard; granddaughters, Danielle Houser, and Mariel (Gasper) Zerilli; grandsons, Kyle (Chelsea) Lutes, Conner Lutes, Ethan and Evan Alvarez; nieces, Patricia (Ragnar) Sparby, Colleen Cusack, Peggy (Chris) Rivers, Lynne (Anthony) Kennedy, and Maureen Smith; nephews, Daniel Cusack, and Stephen (Kathy) Pritchard. She was preceded by, Mother, Josephine Howard Pritchard; Father, Thomas Pritchard; husbands, Edward Clark, and Frank Watta; brother, Thomas Pritchard; daughter, Joanna Houser; stepson, Douglas Watta. A visitation will be held on Tuesday, February 1, 2022 from 6PM to 8PM at the Haisley Tribute Center 2041 SW Bayshore Blvd Port St. Lucie, Florida. A Mass of Christian Burial will be held on Wednesday, February 2, 2022 at 10AM St. Bernadette Catholic Church with Burial to follow at Forest Hills Memorial Park.

Therese Ann (Pritchard) Watta passed away at Life Care Center of Port St. Lucie on January 25, 2022 at the age of 86. She was born in Flatbush, New York, on November 11, 1935. Terry, as her friends and family called her, was a girl scout, got... View Obituary & Service Information

The family of Therese "Terry" Watta created this Life Tributes page to make it easy to share your memories.

Send flowers to the Watta family.