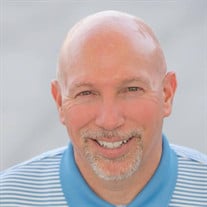 Stephen Michael Farinacci passed away on June 30, 2021 at the age of 57 at his home in Fort Pierce, Florida. Stephen was born and raised in Albany, New York and moved with his family to Fort Pierce, Florida in 1976 at the age of 12. He has lived on the Treasure Coast ever since. He was a graduate of John Carroll Catholic High School, and Stetson University where he studied accounting. Since living on the Treasure Coast he has worked with KPMG Peat Marwick, Harbor Branch Oceanographic Institution, the Treasure Coast Officials Association (TCOA), and Maverick Boat Group. Stephen was always known for his incredible & honest work ethic and giving 110% to all he did, but most important to him was being a loving and supportive husband and father (“Big Guy”) to Marti and Alexis. Stephen always made it a point to put family first, always attending Alexis's sporting events and even her band concerts that sometimes made him cringe. But he would always smile and say, “Great job kiddo, I’m very proud of you!” Those who knew Stephen knew that he was also very passionate about his sports, including the New York Yankees and New York Jets (even though these past few seasons have been some of the Jet's worst). He would always have time to talk that days sporting news with coworkers at the start of a day and he and Alexis always forced Marti to endure watching sports with two of the biggest (& sometimes rowdiest) sports enthusiasts. When Stephen wasn’t working, he enjoyed refereeing and watching soccer, and spending time with family. Family was everything to him. Stephen is survived by his wife of 34 years, Mary M. (Marti) Farinacci; daughter Alexis Farinacci; Father Joseph Farinacci; brother Joe Farinacci; sister Lori Ann (John) Applebee; and brother David (Beth) Farinacci. He is also survived by many nieces and nephews who he deeply loved. He was preceded in death by his daughter MacKenzie Marie Farinacci and his mother Judith Ann Farinacci. A memorial gathering for family and friends will be held on Thursday, July 8th, 2021, from 4:00 PM - 5:00 PM at Haisley Funeral Chapel 3015 Okeechobee Road Fort Pierce, FL 34947. A celebration of life will be held on Thursday, July 8th, 2021 at 5:00 PM at the Haisley Funeral Chapel 3015 Okeechobee Road Fort Pierce, FL 34947, with a reception to follow.

The family of Stephen Michael Farinacci created this Life Tributes page to make it easy to share your memories.

Send flowers to the Farinacci family.