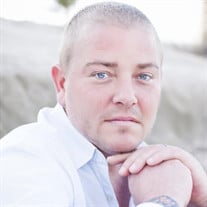 Steele Anthony Smith Shannon Von Hendershot made his last inappropriate and probably sarcastic comment on September 23, 2021. They thankfully broke the mold after Steele was born to Steve Shannon & Suzanne Hendershot (Mastin) Dec 3, 1973 in Scottsdale Arizona. He loved his family, playing guitar, singing at the top of his lungs, and a fine scotch , he also loved spending time at the beach so it only made perfect sense that on January 17th, 2015 Steele and his beloved wife Alycia said their I Do’s knee deep in ocean water on Jensen Beach Florida. Although a less than average life span, Steele did not live an average life. He traveled where he wanted to travel, laughed inappropriately at every chance, read books the ones with a front and back cover, he also loved to tell stories, which lead him to Hollywood to follow his dreams of making movies. Steele had fun while in LA he got to model and act, he often said he knew he had made it big time when he landed his most memorable roll as the rollerblading hottie in a Coca Cola commerical. He is survived by his “Trouble and Strife” Alycia Ann; his son, Aidan W. Tyssedre (Shannon) who he loving nicknamed “kid”; parents, William & Suzanne Hendershot (Canada); father Steve Smith Shannon; sisters, Williamina Hendershot, Holly Gabel (Scott); brothers, Heath Hendershot, Ryan Shannon; nephew, Levon; niece, Hadley; and friends Esabel, Duane, Mark and Ernie. There will be no viewing since his family refuses to honor his request to have him standing in the corner of the room with a glass of scotch in his hand and a cigarette in his mouth so that he would appear natural to visitors. Since funeral services probably won't be allowed in any reputable house of worship, a memorial service and celebration of life will be held at a later date Everyone who remembers him is asked to celebrate Steele’s life in their own way; raising a glass of your favorite beverage in his memory would be quite appropriate.

The family of Steele Anthony Smith Shannon created this Life Tributes page to make it easy to share your memories.