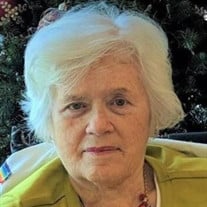 Sheila Frances (Donovan) Robinson, previously of Arlington, MA, passed at age 79 on September 14, 2021 in Boynton Beach, FL at her daughter's home. Sheila was the daughter of the late John E. and Frances P. (Connolly) Donovan, and the wife of the late Gerald A. Robinson. She was predeceased by her brother Robert J. Donovan, and his wife Mary E. McCarthy-Donovan. Sheila graduated from Arlington, MA High School, attended Emmanuel College, Boston MA and received her B.A. in English from Framingham State College, MA. She was an active member of the St. Mary's Women's Club while living in Franklin, MA. Sheila was a gifted artist, receiving a Hallmark art award for her work in watercolor and she also received a pen and ink art award. She had a love for the arts, classical music, and the piano. She was an avid reader with a keen interest in history, and she dabbled in writing poetry. Her poem, “The Positive, the Optimist”, was published by The International Library of Poetry in the book titled Twilight Musings. She is survived by her daughters, Janice S. Robinson of Boynton Beach, FL and Joan M. Robinson and her husband John Hefley of Georgia, VT. She is also survived by her brother, John K. Donovan, and his wife Laurie of San Carlos, CA as well as many nephews, nieces, cousins, and friends. A Catholic Mass will be conducted at St. Margaret of Scotland Church at 141 Main Street, Buzzards Bay, MA at 9:00 a.m. on Friday, September 24, 2021 followed by graveside service at Massachusetts National Cemetery, Bourne, MA at 10:45 a.m. on September 24, 2021. A memorial service will be held at St. Mark’s Catholic Church in Boynton Beach at a later date. In lieu of flowers, family members request donations in Sheila F. Robinson's memory to St. Jude Children's Research Hospital, National Multiple Sclerosis Society, or Wounded Warrior Project.

Sheila Frances (Donovan) Robinson, previously of Arlington, MA, passed at age 79 on September 14, 2021 in Boynton Beach, FL at her daughter's home. Sheila was the daughter of the late John E. and Frances P. (Connolly) Donovan, and the wife... View Obituary & Service Information

The family of Sheila F (Donovan) Robinson created this Life Tributes page to make it easy to share your memories.

Send flowers to the Robinson family.