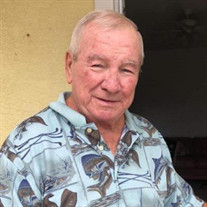 In Loving Memory of Ronald P. Sheridan, Sr. Ronald P. Sheridan, 76, of Fort Pierce, Florida, passed away peacefully Tuesday, March 8, 2022, with his family by his side. Born on October 31,1945 in Philadelphia, PA, he was the son of the late Thomas J. Sheridan and Irene (Averill) Sheridan. Ron was the loving husband of JoAnne Sheridan, sharing over 59 years of marriage. Ron is the father of three sons: Ronald P. Sheridan, Jr., husband of Deborah (Harpel) Sheridan, of Downingtown Pa., Thomas W. Sheridan, husband of Lisa (Weber) Sheridan, of Blue Bell, Pa., and Timothy M. Sheridan, of Philadelphia Pa. Ron was especially close to his niece Jennifer Sapira and his nephews Peter Staskin and Charles Staskin (deceased). In addition to them, Ron is survived by 11 grandchildren, 7 great-grandchildren, his sister, Patsy Clark wife of George Clark, of Ridley, PA; his brother Joseph Sheridan husband of Susan Sheridan of Newtown Square, Pa and many loving nieces and nephews. Ron loved to spend summers and his early years of retirement on the bay in Sea Isle City, NJ where his home was always open for visits from family and friends. He was an avid boater and fisherman who earned his Master Captain’s license and was affectionately known as “Captain Empty Hook”. He loved to fish with his wife (for whom he coined the fishing moniker “Flounderface”), children, grandchildren and friends. Ron loved and respected the water which filled him with peace and patience. Through hard work and commitment, Ron lived the “American Dream” by providing his family and children with more opportunities and experiences than he had. While he was not afforded the opportunity to attend college, Ron recognized the importance of education and sacrificed to support his three sons who each became first-generation college graduates. Ron’s intelligence, intellect and wit would shine during family discussions around the kitchen table, marathon games of Trivial Pursuit and anytime Jeopardy aired. Ron was “Old School” emanating from his childhood upbringing in the “Devil’s Pocket.” He lived his life in a direct and deliberate fashion. He was fiercely loving, loyal and incredibly generous - quietly helping family, friends and strangers in times of need. For the past twenty years, Ron lived on the water in Fort Pierce, FL where he made many lasting friendships and memories. Ron’s life was an incredible voyage and he will be dearly missed. Consistent with his fun spirit and love for gathering with family and friends, Ron’s wish is for an “Irish Funeral” without the funeral. In that spirit, a Celebration to honor his life and legacy will be held at a later date via invitation in Fort Pierce, Florida and later this summer in Sea Isle City, NJ. Burial at Sea is private. In lieu of flowers, memorial contributions may be made in Ron’s name to Michael Bartone Memorial to Fight ALS:1961 Goldenridge Dr., Downingtown, PA, 19335.

In Loving Memory of Ronald P. Sheridan, Sr. Ronald P. Sheridan, 76, of Fort Pierce, Florida, passed away peacefully Tuesday, March 8, 2022, with his family by his side. Born on October 31,1945 in Philadelphia, PA, he was the son of the late... View Obituary & Service Information

The family of Ronald P. Sheridan Sr. created this Life Tributes page to make it easy to share your memories.

Send flowers to the Sheridan family.