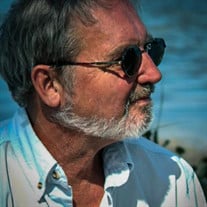 Roger LeRoy Creswell It is with heavy hearts that we say goodbye to Roger “LeRoy” Creswell, 70, of St. Lucie Village in Fort Pierce, Florida. LeRoy passed away on October 27th at Jackson Memorial Hospital in Miami, Florida after a long battle with cancer. LeRoy attended Frostburg State College, the University of Maryland, and received his master’s degree from the University of Miami. He was dedicated to making a difference as a scientist, a teacher, and a mentor in the fields of aquaculture and environmental science. LeRoy was a research scientist at Harbor Branch Oceanographic Institution, Inc. and director of the Tropical Aquaculture department. He taught graduate and undergraduate courses in aquaculture and served as adjunct faculty at Florida Institute of Technology, and Indian River State College. His extensive involvement in professional organizations includes Board of Directors and two-term president of the Caribbean Aquaculture Association; Director of the World Aquaculture Society and its president in 1994; Serving on the Board of Directors of the Gulf and Caribbean Fisheries Institute and current Executive Secretary of the Institute; Immediate past-president of the National Shellfisheries Association receiving the prestigious David Wallace Award; Serving on the Board of Directors and past-president of the Treasure Coast Environmental Education Council; Past-president of the Florida Association of Natural Resource Professionals. In addition, he held two patents, authored a book and several invited book chapters, authored over 30 publications and manuals, and has been principal editor for sixteen books. Recently retired from the University of Florida as a Regional Education Coordinator for the Sea Grant Marine Extension Program, he continued to work tirelessly to focus attention on and to benefit the marine environment. LeRoy was preceded in death by his father Herman Creswell and his mother, Charlotte Creswell. He is survived by and was the beloved husband of Danita Creswell and the devoted father of Leala Creswell of Los Angeles, California and Alonnah Creswell of Arlington, Virginia. To know LeRoy’s kind and giving spirit was a gift enjoyed and appreciated by many. His legacy of friendship and love cannot be measured. LeRoy left us with many beautiful memories, and he will remain in our thoughts and hearts forever. In lieu of flowers contributions may be made to Ocean Research and Conservation Association - ORCA, 1420 Seaway Drive, Ft. Pierce, Florida 34949. A celebration of life in honor of LeRoy is pending. Information will be announced at a later date.

Roger LeRoy Creswell It is with heavy hearts that we say goodbye to Roger &#8220;LeRoy&#8221; Creswell, 70, of St. Lucie Village in Fort Pierce, Florida. LeRoy passed away on October 27th at Jackson Memorial Hospital in Miami, Florida after... View Obituary & Service Information

The family of Roger LeRoy Creswell created this Life Tributes page to make it easy to share your memories.

It is with heavy hearts that we say goodbye...

Send flowers to the Creswell family.