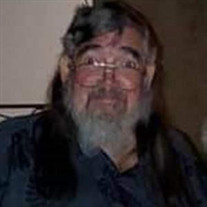 Robert “Bobby” Gerard Jacques, Jr. was born on June 30, 1954 to the late Robert Gerard Jacques, Sr. and the late Mary Claire Cote in Portsmouth, Virginia. He passed through Heaven’s Gate on July 11, 2021. He is survived by his wife of 46 years, DeLslie M. Jacques of Fort Pierce, FL; his sons, Robert G. Jacques III (LaShun Jacques) of Memphis, TN and Aram R. Jacques (Davina Jacques) of Sierra Vista, AZ; 11 grandchildren, Brittani Manning (Chad Manning), Robert Jacques IV, Reginald Adams, Alexa Randolph (Alec Randolph), Donovan Perry Jacques (Alex Perry Jacques), Drequan Adams, Jacob Jacques (Kendy Jacques), Felicity Edwards, Samuel Jenkins, Noah Jenkins, and Aliyah Jenkins; 6 great-grandchildren, Andrew Kissinger, Landin Manning, Camden Manning, Alivia Randolph, Adelyn Jacques and Asher Randolph; brothers, Dennis Paquin, Michael Jacques, Christopher Ferrazzano, and James Ferrazzano, Jr. He was preceded in death by his father, Robert G. Jacques, Sr., mother, Mary C. Ferrazzano Cote and brother, Kenneth Jacques. Bobby served honorably in the United States Navy from 1972-1987 and attained the Rank of Chief Petty Officer Machinist Mate. He was a Vietnam Veteran, a member of the Libyan Bombing Rescue, and a part of the Blockade during the Iran/Iraq War. He worked as a Nuclear Valve Technician for Furmanite from 1987-1995 and as a Nuclear Valve Planner for Florida Power and Lighting from 1995-2019 when he retired. He loved bowling, playing poker (especially for Cancer and Animal Shelter Charities), coloring, and taking care of his family. He was a member of the American Legion Post 40 and Indian River Presbyterian Church. You may not physically be here but you will always be present. You may not have seen it but you left an impact like no one else could. Now is your time to rest Sailor, your tour of duty is complete. A gathering will be held on Saturday, July 17, 2021 from 9:00-10:00 AM with a memorial service to follow at 10:00 AM at Haisley Funeral Home, Fort Pierce.

The family of Robert "Bobby" Gerard Jacques Jr. created this Life Tributes page to make it easy to share your memories.

Send flowers to the Jacques family.