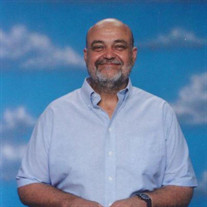 Robert (Bobbe) Michael Goins passed away peacefully on Friday, March 11, 2022 in Gainesville, Georgia. He was 70 years old. He was born on September 15, 1951 in Fort Pierce, Florida. Bobbe was the youngest of the 4 children of Herman and Lula Mae Goins. After graduating from Dan McCarty High School, he attended the University of Florida. He married Judy Monroe in 1969. They returned to Fort Pierce where they were active members of Westside Baptist Church. Bobbe handcrafted a beautiful piece of stained glass for the baptistry when the church was located at the corner of Orange Avenue and 25th Street. After many years in Fort Pierce, they moved to Georgia so Bobbe could pursue his lifelong dream of being a cattle rancher. He built Breakaway Farms, a farmhouse, several barns, and rental cabins on more than 30 acres northwest of Blairsville, Georgia. He also had several other pastures that he maintained and used for his cattle. His very first cow was named “Friendly” and she was definitely friendly. The most famous of his bulls was the “Gambler”, bought from a herd of Kenny Rogers’ cattle. After nearly 40 years of marriage, Bobbe and Judy divorced. She died in 2014 in South Carolina. Even though he had no children of his own, Bobbe deeply loved his nine nieces and nephews. They have many fond memories of experiences with him on the farm. He was an avid hunter and outdoorsman. He always found time for duck and deer season. He hunted with a bow, black powder, and shotgun. Up before daylight and back after dark, he would make the most of every opportunity. He was preceded in death by his parents, Herman and Lula Mae Goins, his sister, Elizabeth, and nephew, Gary Hamrick. He is survived by his sister, Wanda (Henry) Watanabe and brother, John “Buddy” (Marie) Goins, nieces, nephews, and many other extended family members. Services: Visitation will be held on Saturday, March 26, 2022 from 10:30-11:30 AM with a service to follow at 11:30 AM at Haisley Funeral Home, Fort Pierce. Burial will follow at Riverview Memorial Park.

Robert (Bobbe) Michael Goins passed away peacefully on Friday, March 11, 2022 in Gainesville, Georgia. He was 70 years old. He was born on September 15, 1951 in Fort Pierce, Florida. Bobbe was the youngest of the 4 children of Herman and... View Obituary & Service Information

The family of Robert (Bobbe) Michael Goins created this Life Tributes page to make it easy to share your memories.

Send flowers to the Goins family.