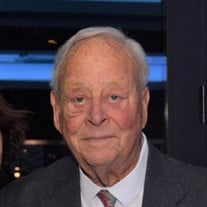 Robert "Bob" Bocchicchio, a committed family man and wonderful teacher passed away Thursday, May 13th at his home in Fort Pierce, Florida with his family by his side. He was 86 years old. Bob was born in Brooklyn, NY to Pasquale and Anne Bocchicchio and raised, along with his brother Dick, in Rosedale, NY. After graduating high school, Bob attended Hosftra University where he earned his Industrial Engineering degree and met his wife, Florence. Later, he attended CW Post and earned his master’s degree in education and mathematics. After completing missile training, he served on the staff of the General as Second Lieutenant at Fort Bliss from 1958 to 1960. After his departure from the Army, he relocated to Long Island with his wife and twins to work as an engineer at American Machine and Foundry in Connecticut. During this time, he and his wife purchased their first home in Wantagh, Long Island. In 1967, they designed and built a home of their own in Oyster Bay, Long Island where they would spend the next 30 years raising their 5 children. As a family they enjoyed spending their summers on the boat cruising to and from Mystic and Essex, CT, Block Island, Nantucket, Martha’s Vineyard and many other memorable places. His love of boating and being on the water started at age 14 when he was asked to captain boats for members of the Keystone Yacht Club of which his parents were members. He would later build a 24-foot inboard cabin cruiser with his childhood friend Gene. The two spent many long hours running the boat from the Yacht Club to the eastern end of Long Island. In 1962, Bob utilized his education degree as a math teacher for Oceanside High School where he remained until his retirement in 1995. Also known as “Mr. B” he was well loved and respected by his students for his humor in the classroom and was known for making learning fun! Over the years, Bob has run into and been contacted by many of his students who shared their memories with him. Bob resided on Hutchinson Island in Fort Pierce, FL in a home with a beautiful view of his boat at his dock. He became a member of the Fort Pierce Yacht Club in 1998 and a Board Member in 2004 later serving as Commodore in 2008. He is survived by his loving wife of almost 63 years, Florence “Flo” Erhard Bocchicchio of Fort Pierce, FL; son, Robert (Denise); daughters, Karen (Mark), Nicole (Frank), Ellen (Tom), and Linda (Rob); 11 grandchildren, Robert, Sara, Troy, Mark, Samantha, Frank, Amanda, Madalyn, Michael, Jack, and Sydney as well as his brother, Richard (Phyllis) and a lifetime of great friends both old and new. The greatest loves of his life were his family and boating. He was so proud of his children and his grandchildren. He was a wonderful man, husband, father, grandfather, and friend. He was loved by all that knew him and lived a full and happy life. He will truly be missed but never forgotten and his legacy will live on through his family. In lieu of flowers please make donations to Memorial Sloan Kettering https://giving.mskcc.org/ways-to-give or Treasure Coast Hospice; https://www.treasurehealth.org/292/Donate in memory of Bob. A Gathering will be held on Friday May 28, 2021 from 10AM to 11AM with a Memorial Service to begin at 11AM at the Haisley Funeral Chapel 3015 Okeechobee Road Fort Pierce, Florida 34947.

Robert "Bob" Bocchicchio, a committed family man and wonderful teacher passed away Thursday, May 13th at his home in Fort Pierce, Florida with his family by his side. He was 86 years old. Bob was born in Brooklyn, NY to Pasquale and Anne Bocchicchio... View Obituary & Service Information

The family of Robert "Bob" F. Bocchicchio created this Life Tributes page to make it easy to share your memories.

Send flowers to the Bocchicchio family.