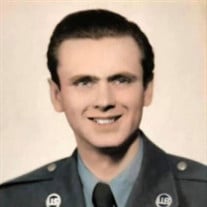 Richard Edward Yale Richard Edward Yale, 93, of Fort Pierce, Florida passed away on January 28, 2022. Born on July 15, 1928 to Armand and Ida R. Yale in Pawtucket, Rhode Island. Richard served his country during the Korean War in the National Guard. He grew up in Providence, Rhode Island and studied electrical engineering at the University of Rhode Island and Worcester Polytechnic Institute. After college Richard landed a job at the American Bell Telephone Company. He was the loving uncle of Deborah and Gary Brooks of Fort Pierce, Florida, Paul and Cheryl Yale of Parkman, ME, Janet and Bud Walstedt of Willington, CT, and Stephen Yale of Manchester, CT. He was a great-uncle to Lukas and Kristin Tubeck of Tallahassee, FL and their two children, Connor and Hadley, and Lindsay Sutherland of Willington, CT. He treated his nieces and nephews with the greatest of kindness. Richard spent summers in Lac-Saguay, Quebec, fishing and canoeing with family, selling hot dogs with his brother, Paul, at Roger Williams Park in Providence and Cub and Boy Scout time at Camp Yawgoog in Hopkinton, Rhode Island. His mother, Ida, started the first Cub Scout pack in Providence, Rhode Island. He enjoyed the Boston Red Sox, photography, classical music and watching any sports on T.V. He especially liked watching the Atlanta Braves with his grand-nephew, Lukas. Richard retired to Destin, FL with his brother, Paul. There he enjoyed walking and relaxing on the beach, eating breakfast at June’s Dunes Restaurant, and eating at Harbor Docks and The Louisiana Lagniappe restaurants. June used to say that he was “the happiest man in Destin”. He always had a smile and a kind word for everyone. He enjoyed his last eight years in Fort Pierce, FL and the last two at the Lynmoore at Lawnwood Assisted Facility, where he made many friends with the residents there. He is preceded in death by his parents, Armand and Ida Yale and his brother, Paul Yale. His family would like to extend their appreciation and gratefulness to the staff at the Lynmoore at Lawnwood Assisted Living Facility of Fort Pierce, FL and Treasure Coast Hospice of Fort Pierce, FL. A private burial will be held at Notre Dame Cemetery in Pawtucket, Rhode Island at a future date.

The family of Richard Edward Yale created this Life Tributes page to make it easy to share your memories.

Send flowers to the Yale family.