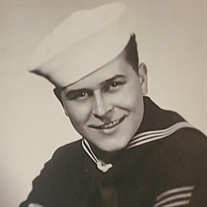 Richard Dennis Sopko "Bipa" entered into eternal life on March 10, 2022 at the age of 91. He was born in Stratford, CT on January 3rd, 1931 to the late Stephen and Elizabeth (Sedlak) Sopko. Richard retired from Textron Co. and relocated to... View Obituary & Service Information

The family of Richard Dennis Sopko created this Life Tributes page to make it easy to share your memories.

Send flowers to the Sopko family.