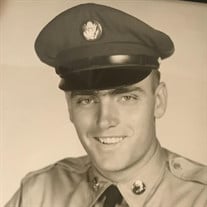 Richard (Dick) Schaefer, 85, of Port St. Lucie, passed away peacefully at home with his wife on March 11th, 2021. Born on September 14, 1935 to Henry and Helen Schaefer, he grew up in Hempstead, Long Island, New York. He was the younger of two sons. He was a member of the Hempstead High School Rifle Association and joined the U.S. Army after graduation. He was in basic training at the same time as Elvis Presley. He later transferred to the National Guard. He married Kathleen Rodler in 1953 and they had three children. They were married for 37 years when Kathleen died in 1991. Dick remarried Nancy Rooker and they have spent the last 29 years together. Richard's career began with Grumman Aircraft in Bethpage, New York. He was offered an opportunity to transfer to Stuart Grumman Aircraft. It was here he was involved in several major projects including the Ben Franklin submarine which made history mapping the Gulfstream and the PGH1 –Patrol Gunboat Hydrofoil. Overall, he worked for Grumman over thirty years and made many valuable contributions as a tool and die maker. Dick was also involved in the creation of The Port St Lucie Optimist Club which is still in existence fifty years later. He was a member of the Grumman Retirees Club. Dick loved cooking, wood working, remodeling, and traveling. He loved to knock down and build up walls with his little buddy, Corbin. He was famous for his white chocolate cheesecake and linzer torte family recipe and loved to make them for family and friends. He loved to cruise Hawaii, the Caribbean and Europe, which he did on numerous occasions. He will be missed by his extended family in Mulheim, Germany, with whom he spent his 80th birthday. Survivors include loving wife, Nancy (Rooker) Schaefer of Port St. Lucie, Florida; son, James (Donna Everett) Schaefer of High Springs, Florida; daughter, Jennifer Grandpre of Port St. Lucie, Florida; son, Jim (Schaleen) Rooker of Aztec, New Mexico; and Gary (Rose Lucas) Rooker of Las Cruces, New Mexico; and daughter Donna (Andrew) Blake of Jensen Beach, Florida; grandchildren, Anthony Schaefer of Port St. Lucie; Florida, Cody Grandpre of Connecticut; Amanda Everett of High Springs, Florida Heather Calaway of Stuart, Florida; Amanda Lyke of Piedmont, South Carolina; Quentin Rooker of Aztec, New Mexico and Corbin Blake and Adalyn Blake, both of Jensen Beach, Florida. He was predeceased by his parents, Henry and Helen; his brother Oscar Schaefer; his wife, Kathleen Schaefer and son, Jason Schaefer. In lieu of flowers, memorial contributions may be made in Dick’s honor to Hospice of the Treasure Coast; https://www.treasurehealth.org/292/Donate or 5000 Dunn Road Ft. Pierce, FL 34981. Memorial services will be announced later.

Richard (Dick) Schaefer, 85, of Port St. Lucie, passed away peacefully at home with his wife on March 11th, 2021. Born on September 14, 1935 to Henry and Helen Schaefer, he grew up in Hempstead, Long Island, New York. He was the younger of... View Obituary & Service Information

The family of Richard "Dick" Schaefer created this Life Tributes page to make it easy to share your memories.

Send flowers to the Schaefer family.