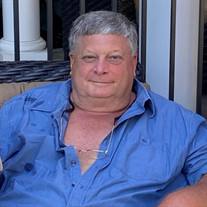 Richard Allen Dargan, 63 passed away on September 19, 2021 in Fort Pierce, Florida. He was born in Douglas, Massachusetts on December 29, 1957. Rick was the mechanic and owner of R&J Service center specializing in Foreign and Domestic repairs. He loved riding his Honda Gold Wing up and down the East Coast. He was also a lover of music and collected vinyl records and other types of media. Rick’s passion for music and movies always brought a smile to his family and friends. He could quote a famous line from a movie or recall the artist and title from a song just by hearing a few notes when it first came on the radio. His generosity extended beyond just helping others with their vehicles. He would go out of his way to find that illusive part to help fix whatever was broken. Rick loved to cook on the grill. Whether it was one of his 2lb burgers or the teriyaki tenderloin, sharing a meal was another way he showed his hospitality to others. His friends will remember him for having the best stereo system they have ever heard. Rick was a good friend and brother. He will be missed. Rick was proceeded in death by a son Richard Edward Dargan; his niece Abigail Dargan; his Grandparents Richard G. Dargan and Janice Dargan; and his Aunt JoAnne Surlas. Survivors include a daughter Kristen Dargan of Springfield, Massachusetts; Parents Richard W. Dargan and wife Katie of Southbridge, Massachusetts; Mother Carol (DeBoer) Leyda of Harrisburg, Pennsylvania; sister Wendi (Dargan) Braddock and husband Benjamin of Harrisburg, Pennsylvania; brother James Dargan and wife Sarah of Cary, North Carolina; sister Marci Drummy and husband Jack of Norward Massachusetts; nephews George Braddock of Los Angles, California, Robert Dargan of Cary, North Carolina; cousin Robin Fels and husband John of Port St. Lucie, Florida; cousin Bonnie McDermott and husband Mark of Port St Lucie, Florida; countless friends from the Son of the American Legion and Fraternal order of Eagles and a very special friend and business partner James Puglisi from Ft Pierce, Florida. Rick was cremated at Haisley Funeral & Cremation Service in Fort Pierce, Florida. His ashes will be laid to rest beside his grandparents Richard G and Janice Dargan in Evergreen Cemetery in Douglas, Massachusetts. Donations can be made in his memory to the Sons of the American Legion or Fraternal order of Eagles in Fort Pierce.

Richard Allen Dargan, 63 passed away on September 19, 2021 in Fort Pierce, Florida. He was born in Douglas, Massachusetts on December 29, 1957. Rick was the mechanic and owner of R&J Service center specializing in Foreign and Domestic repairs.... View Obituary & Service Information

The family of Richard A. Dargan created this Life Tributes page to make it easy to share your memories.

Send flowers to the Dargan family.