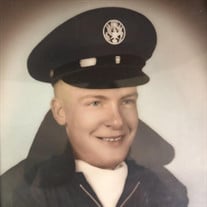 Raymond (Ray) Salyer Raymond (Ray) Salyer was born on 12/28/1936 in Ezel, Kentucky and died on 12/13/2021 Fort Pierce, Florida. He joined the Air Force with honorable discharge and eventually obtained a government job with the IRS. Ray attended Morehead State University and graduated with his bachelor’s degree. After retiring from the IRS he would substitute teach from time to time. In his younger years loved to go boating and fishing. Then he grew to love crosswords, reading, watching MSNBC, gambling, and watching birds in his yard while sitting on his porch swing, but most all he loved being a Papaw. Survivors include his sons, Benjamin Salyer and Timothy Salyer-Florida; daughter, Deena Ross-Florida; grandson, Michael Ross-Florida; granddaughter, Jeanie(Chas) Kay-Florida; great-granddaughter, Rylan Ross-Florida; sisters, Barbara (Ken) Durkin, Rita Campbell, and Deborah (Gary) Shrout-Kentucky; brother, Walt (Linda) Salyer-Kentucky; nieces, Lydia, Sandra, Jennifer-Kentucky; nephews, Randy and Stuart, as well as many cousins and friends. He was preceded in death by his mother, Elizabeth Salyer and father, Benjamin Salyer. There will be no services as his wishes were cremation only however if anyone would like to donate to Glioblastoma Foundation in his honor or any Foundation of your choosing that would a very nice gesture and greatly appreciated. His family will miss him dearly.

The family of Raymond (Ray) Salyer created this Life Tributes page to make it easy to share your memories.

Send flowers to the Salyer family.