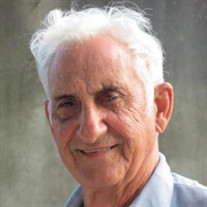 Peter P. Loupe Peter P. Loupe passed away peacefully after a brief illness on Wednesday, May 4, 2022 at the Treasure Coast Hospice House, Fort Pierce. Mr. Loupe was born on April 8, 1925 in North East, PA to Frank Lupo (Loupe) and Mary (Falzone) Lupo (Loupe) from Serradifalco, Sicily, Italy and San Cataldo, Sicily, Italy. Peter was the 6th child of 8 children born to Frank and Mary. He was the last surviving child. He became a barber in 1951 working with his father in the family owned barber shop in North East, PA. In 1956 he moved with his wife and two children to Fort Pierce, FL. He worked at Manny's Barber Shop located in the Historical Arcade Building until opening his first barber shop across from the current location of the Ft. Pierce Utilities building on Second Street. His last shop was located at 1122 Orange Ave. Ft. Pierce. He retired in 1991 after 40 years in the barber business to care for his wife. He was a proud World War II Veteran of the United States Navy. Station at the USN Supply Depot, Oran Algeria. Obtaining the rank of Coxswain. In 2010 he was privileged to be a participant of the Southeast Florida Honor Flight for Veterans on WW II to Washington, DC. He enjoyed spending time with his family, going fishing, crabbing, and boating with his son Rick and family. He loved telling stories about WW II and his experiences in the Navy. Has extremely proud of his Sicilian heritage. Letting you know he was Sicilian not Italian. Peter and Dorothy (wife) helped their daughter Rose Lee raise her children Peter and Michelle and also grandson Richard. Peter is survived by his daughter, Rose Lee Loupe Henson; son, Richard Loupe; grandson, Peter M. Henson; great-grandchildren, Richard Henson, Marty Tomlinson, Micheal Reed, Hannah Henson, Bobbie-Lee Bailes and Matthew Henson; and numerous nephews and nieces. He was preceded in death by his wife, Dorothy (Stempka) Loupe, granddaughter, Michelle Henson, great-grandson, Riley James Henson, son-in-law, Anthony Selitte Jr., four brothers, Lee, Anthony (Tony), Harold and Frank Loupe, three sisters, Carrie DiPasquale, Sue Thayer and Laura Totleben and close friend, Doris Grizanti. The family would like to thank Dr. Ian Boykin and his staff and Treasure Coast Hospice House for the special care given to Peter. Donations can be made to the following: St. Anastasia Catholic Church, 407 S 33rd St, Fort Pierce, FL 34947 or to the Southeast Florida Honor Flight, P O Box 1503, Stuart FL 34995. Services: Visitation will be held on Tuesday, May 10, 2022 from 5:00-7:00 PM with a Wake Service at 6:30 PM at Haisley Funeral Home, Fort Pierce. A Mass of Christian Burial will be held on Wednesday, May 11, 2022 at 10:00 AM at St. Anastasia Catholic Church. Burial will be held at White City Cemetery.

The family of Peter P. Loupe created this Life Tributes page to make it easy to share your memories.

Send flowers to the Loupe family.