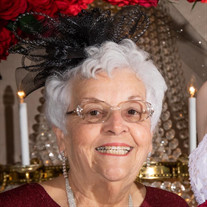 Pamela Joyce Palmeiri, 80, entered eternal rest on Sunday, April 24th 2022 at Jupiter Medical Center. Pam was born on September 3rd, 1941 to Edward and Amelia Benlein in Fremont, Ohio. She was the youngest of four siblings, two brothers and a sister. After graduation from high school, she moved to New York where she spent several years in Queens, Brooklyn, and Staten Island. There she had her son, Gary with her first husband, Benjamin Rumain. She worked as a Sales Agent for National Airlines, Pan Am and Intercontinental Hotels. She eventually found herself in Florida where she would spend her life gardening, and enjoying the sunshine with her husband Vinnie Palmieri. Pam was a kind and loving soul whose thoughtful demeanor made her stand out. She befriended many throughout her life, and is remembered with love and warm memories. She enjoyed cooking, baking, traveling, and collecting clowns. She was an active member of various groups, such as the Moose Lodge, the American Legion, the Red Hatters, Weight Watchers and Chair Yoga. Special thanks to these dear friends and their families for their years of love and friendship, and their support during this time. Pam is preceded in death by her husband, Vincent Palmieri, sister, Betty Zappia and brother, Eugene Benlein. Pam is survived by her son Gary, his wife Susan, and their two children, Anne (Robert) and Alexander. She is also survived by her older brother, Frank Benlein, and four daughters by marriage: Carmella Palmieri, Phyllis O’Brien (Chuck), Dolores Palmieri, and Dorothy Palmieri, along with their children and grandchildren. In lieu of flowers, donations in Pam’s name can be made to the Alzheimer's Association Southeast Florida chapter, 3333 Forest Hill Blvd, West Palm Beach 33406. A gathering will be held on Monday, May 9, 2022 from 10AM-11AM with a service to begin at 11AM at the Haisley Tribute Center 2041 SW Bayshore Blvd Port St. Lucie, FL 34984.

The family of Pamela Joyce Palmieri created this Life Tributes page to make it easy to share your memories.

Send flowers to the Palmieri family.