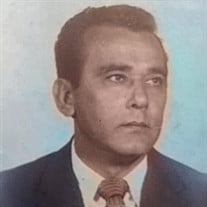 Pablo D. Perez, 83, of Port St. Lucie, Florida passed away on Tuesday, February 2, 2021. Pablo was born at home in San Pablo, Zulueta, Cuba on November 8, 1936 to Manuel Perez and Juana Plasencia. He attended school at Instituto Gutierrez (Gutierrez Institute) in Zulueta, Cuba and Universidad de La Habana (University of Havana) in La Habana, Cuba, where he studied business. Growing up in Cuba, playing baseball and listening to games on the radio, he became a big fan of the New York Yankees and remained a life-long Yankee fan. Pablo was a man of faith, a devoted father, husband and son who loved spending time with his family and also enjoyed going to the beach and fishing. In Cuba, he worked for Banco Los Colonos (Colonist Bank) located in Havana. He eventually joined the anti-revolutionist movement and was part of the resistance against the Communist Revolution of 1959. His anti-communist ideology and involvement against the communist revolution landed him in jail in 1963. He was sentenced to 10 years as a political prisoner. Pablo was offered a reduced sentence if he simply converted and joined the communist party’s military forces, however, always a man of strong convictions, he declined and served his full 10-year sentence in Presidio Isla de Pino – Prisoner # 32629. In 1980, he relocated to New Jersey, where he initially worked as a store manager for his cousin, Arnaldo Monzon, the owner of Arnold Stores; a chain of women’s fashion stores in NJ and New York. He would later open his own auto repair and gas station business in South Florida, in the city of Hialeah. After selling his business, Pablo held several jobs over the years, finally retiring as a custodian for the Martin County School Board. Regardless of the job, Pablo was a man who always gave his very best effort. He passed this life lesson to his sons; always reminding them that regardless of what you do in life, whether you own a business or clean floors, you always give it your all and do the best job you can. He is survived by his beloved wife of 46 years, Isabel M Perez; sons, Lestyier Perez Ramos, and Carlos Perez; grandson Ethan Perez; sisters, Ana Perez, and Rafaela Melian; as well as many cousins, nieces, and nephews. He was predeceased by his parents; Manuel Perez, and Juana Plasencia; brother, Ernesto Perez and cousin, Arnaldo Monzón. A memorial gathering will be held on Saturday, February 13, 2021 from 11AM to 1PM with a service to begin at 1PM at the Haisley Funeral Home Tribute Center 2041 SW Bayshore Blvd Port St. Lucie, Florida 34984. Inurnment will follow at Rolling Oaks Cemetery.

The family of Pablo D. Perez created this Life Tributes page to make it easy to share your memories.

Send flowers to the Perez family.