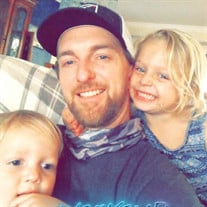 Nicholas Allen Cunningham (Nick) Nicholas Allen Cunningham, 35, passed away unexpectedly, on February 28, 2021 at the age of 35 at his home in Fort Pierce, FL. Nick was born on March 28, 1985 and was a lifelong resident of Fort Pierce. Nick is survived by his mother, (Cricket) Yvonne Allen Cunningham; his father, (Butch) Stuart Ross Cunningham; his stepmother, Louise Marie Cunningham; his children, Paisley Wright and Levi Cunningham; his sisters, Jessica and Andrea Cunningham; his girlfriend, Taylor Littell; Paisley and Levi’s mother, Maylynn Wright; and many uncles, aunts, cousins and dear friends. He was predeceased by his grandmother, Valeria Cunningham, his grandfather, Walter Cunningham, his grandmother, Joyce Story, his grandfather, Roger Allen, and his grandfather, Bill Story. Nick was a devoted father and loved his children more than anything in the world. He had great passion and talent for cooking and took immense joy in surfing with his dad and friends. Nick was an exceptionally skilled bowler, enjoyed fishing, and nature. He was a hard worker and was employed at Sharky’s restaurant for many years and also built boats at Bluewater Sportfishing Boats. He will always be remembered as a loving, kind, smart, talented, and passionate man who loved his family and friends dearly. He had a great sense of humor; he was full of life and always knew how to make people smile. He will be deeply missed by his family, friends, and all who knew him. He has touched the hearts of so many. In lieu of flowers, donations can be made to Nick’s memorial GOFUNDME that his sister, Andrea, created on Facebook. The proceeds will benefit his children, Paisley and Levi. A funeral service is scheduled for March 14, 2021 at 2:00pm, at Haisley Funeral home in Fort Pierce. It will be followed by a Celebration of Life directly after at the American Legion post 40, located at 810 S. US HWY 1, Fort Pierce, FL 34950, for people who would like to attend. This will be a more casual event where we can relax and celebrate Nick’s life while reminiscing of good times with him. Food and drinks will be served and alcoholic beverages sold at the bar.

The family of Nicholas Allen "Nick" Cunningham created this Life Tributes page to make it easy to share your memories.

Send flowers to the Cunningham family.