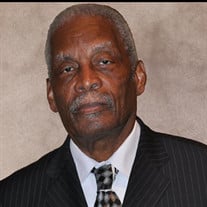 Milton Manning, 88, of Port St. Lucie, Florida entered eternal rest on February 13, 2022. Milton was born February 17, 1933 in Trinidad, West Indies to Aldric Manning and Eunice Crawford. In Trinidad, he worked professionally as a baker and a rigger. He brought his love of baking to the United States where he taught his wife and descendants to bake. Milton initially worked as a maintenance mechanic after immigrating to the United States. He became a tireless advocate for fair housing in New York City in order to mitigate the unsafe living conditions so many endured. As a certified 7A Administrator, he renovated and managed neglected, unsafe apartment buildings reclaimed from absentee slumlords in Manhattan and Brooklyn, enabling thousands of residents to finally have quality housing. He was awarded for his outstanding service by Mayor Koch. In addition to his advocacy work, Milton enjoyed international travel with his wife and family. A pinnacle of his adventures was celebrating Mass at the Vatican. A gourmet and oenophile, he was also a devotee of classical music and opera. Milton was also known for his skilled woodworking. Perpetually active, he brought all his passions together to create a home filled with laughter, beautiful art and music, good food and a multitude of friends. Survivors include his loving wife, Lois Manning of Port St. Lucie, FL; daughter, Retired Veteran, Lydia Manning of Georgia; daughter, Roxanne Manning, PhD of California; son, Milton Manning of Port St. Lucie, FL; sister, Beryl Almarales of Trinidad; grandchildren, Darryl Manning, Eunice Manning, Jasmin Manning, Theodore Weinberger, Anika Weinberger, Keegan Jones, Kiara Manning, Kaitlin Manning, and Myra Grace Manning; great-grandchildren, Seniya Manning, Jason Chappelle, Micaela Jade Chappelle, and Kassiel Harper. He was preceded in death by his sisters, Grace Blackett, Jill Thompson, Joyce Shaik, and Myra Serrant, and his grandson, Micah Weinberger. He will be missed by a multitude of nieces, nephews and close friends. In lieu of flowers, memorial contributions may be made in Milton’s honor to the American Heart Association: http://www2.heart.org/goto/MiltonManning Visitation will be held on Wednesday, February 23, 2022 from 4-8 PM with a prayer service at 6:00 PM at Haisley Tribute Center, 2041 SW Bayshore Blvd Port St. Lucie, Florida 34984. A Mass of Christian Burial will be held on Thursday, February 24, 2022 at 10:00 AM at St. Bernadette's Catholic Church, 350 NW California Blvd Port St. Lucie, FL 34986.

The family of Milton Manning created this Life Tributes page to make it easy to share your memories.

Send flowers to the Manning family.