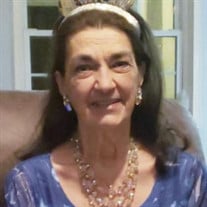 Michele Marie Graef-Wighard, 73, of St Lucie, Florida passed away on April 22, 2021. Michele was born on May 17, 1947 in Newark, New Jersey and raised in East Orange, New Jersey. She graduated from Barringer High School in Newark. Michele married her beloved husband, Frank twice; the second time was at the Cathedral Basilica of the Sacred Heart, New Jersey in 1965. Michele was a successful singer, entertainer, and songwriter who sang with famous people including, The Four Seasons, Connie Frances, and The Supremes. She created several albums on her own label, “Michele.” She sang at a lounge in Elizabeth in a “every man must put on a jacket environment.” It was at this lounge that she met her beloved husband of 55 years; at the age of 18. Throughout her life, she went from playing guitar, to recording records, to singing and entertaining for the public directly to married life. She was a foster mother to 25+ children. She was a beloved wife, mother, homemaker, teacher, realtor; she also opened the first New Jersey 24-hour emergency shelter for homeless and battered women. Michele had many adventures along her life’s path, while dedicating her life to others. Her sense of style started young as she designed and created her own clothing. Michele enjoyed indulging in different cultural experiences and wanted them to be as authentic as possible, especially when cooking different foods. She enjoyed cooking, and good parties. She always had the special extras that brought smiles and enjoyment to others. Christmas was her favorite time of year, her Christmas trees were always masterpieces, she loved all the things that came with the season, including singing carols, and making cookies with family. “Every day is Christmas,” she would say as she gave out little gifts throughout the year. Michele was the best daughter, wife, sister, mother, aunt, grandmother, Godmother, cousin, and best friend anyone could ask for. She always had a wonderful smile and laugh, and there was always kindness in her sparkling blue eyes. Our beloved Michele always tried to do everything in life with a smile. She was known to give her all, to everything and everyone that she crossed paths with, there was not a mean bone in her body. It truly has been a wonderful life, having known her as a magnificent woman, daughter, sister, wife, mom, aunt, niece, Godmother, grandmother, cousin, best friend. There are not enough words or time to ever tell everything about her; how she loved music, crocheting, dancing, playing chess or cards, shopping, going to the theatre, baking, cooking, entertaining and mostly her loving family. Michele will always be remembered as a true walking Angel on Earth by everyone whose life she touched. Survivors include husband of 55 years, Herbert Frank Wighard of St. Lucie County; daughter and son-in-law, Shereen and Richard Downey, and Juliann Wighard; granddaughter, Celina Downey, all of St. Lucie County; siblings, Edward Graef, Jr., Victoria Lee Stone, Ginette Graef, Gisele Graef, Lisette Freselone; as well as 2 brother-in-laws, 4 nephews, 6 nieces, 10 great-nephews, 3 great-nieces, and more than 18 cousins; all located throughout the United States and France. She was predeceased by her father, Edward Graef, Sr. and mother, Ginette Jacqueline Graef and several other family members. A visitation will be held on Friday, April 30, 2021 from 11AM to 1PM with a prayer service to begin at 1PM at the Haisley Tribute Center 2041 SW Bayshore Blvd Port St. Lucie, FL 34984.

Michele Marie Graef-Wighard, 73, of St Lucie, Florida passed away on April 22, 2021. Michele was born on May 17, 1947 in Newark, New Jersey and raised in East Orange, New Jersey. She graduated from Barringer High School in Newark. Michele... View Obituary & Service Information

The family of Michele M. Wighard created this Life Tributes page to make it easy to share your memories.

Send flowers to the Wighard family.