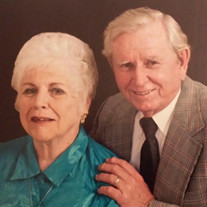 Mary Harvey Ogle Mary Harvey Ogle, 84, peacefully passed away Tuesday, February 2, 2021 in Fort Pierce, FL. Mary was born to Johnnie Harvey and Elizabeth Narramore on June 28, 1936 in Soddy-Daisy, TN. She attended Chattanooga High School and graduated with her teaching degree from the University of Tennessee. One of her highlights in life, while working in a record store, was having a soda and sandwich with Elvis Presley before he became “The King” of Rock & Roll. She married the love of her life, Robert B. Ogle, on June 30, 1957 also in Chattanooga, TN where she began her teaching career. Moving to Fort Pierce, FL in 1969, she was hired by the Saint Lucie County School Board teaching in various schools and finishing her tenure at Fort Pierce Central High School both as a teacher and as an Advisor. Upon retiring from teaching, she worked for a while at Treasure Coast Hospice within the human resources department. For a few years Mary also volunteered her time, once a week, at Westside Baptist Church. Mary was a member of Beta Sigma Phi for over 30 years, the Sunrise City CB Club, Honda Goldenwing Motorcycle Club, and was an avid bowler on various bowling leagues throughout her years. She had multiple hobbies including ceramics, cake decorating, designing, and making jewelry, painting with acrylic and oil paints, knitting, crocheting, sewing, and was a prolific reader of historical romance novels and forensic mysteries. She is survived by her Daughters, Melanie A. Ogle and Mary L. Payne both of Fort Pierce, FL; Son-In-Law, Kevin M. Payne of Fort Pierce, FL; Brother, Larry Harvey of Herndon, VA and her adored furry companion, Smoke. Mary is preceded in death by her husband, Robert B. Ogle, Parents, Johnnie and Elizabeth Harvey and her sister, Janet L. Padgett. Per Mary’s request, command for those who really knew her, there will be no memorial service. However, a year from her day of passing there will be a celebration of her life with family and friends. In lieu of flowers the family asks that contributions be made to Treasure Coast Hospice or Dogs and Cats Forever in Mary’s name.

The family of Mary Harvey Ogle created this Life Tributes page to make it easy to share your memories.

Send flowers to the Ogle family.