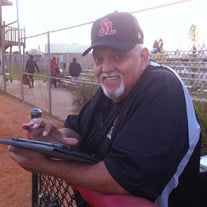 Marvin H. Rhoden lost his battle with circulatory system complications related to end stage polycystic kidney disease and dialysis on December 7, 2021. He passed away peacefully at the age of 74 at St. Lucie Medical Center in Port St. Lucie, Florida. Marvin was born July 1, 1947 in Martinsville, Indiana to Harold Jr. Rhoden and Leona (Thatcher) Rhoden. He was preceded in his death by his parents, his daughter, Jenifer Suzanne Rhoden, and his brother, Ken Rhoden. He is survived by his wife of 47 years, Donna (Forbes) Rhoden; son, Johnnie Rhoden; granddaughter, Carolina Marie Tillman; all of Port St. Lucie, Florida; his brothers, Mel Rhoden (Anita); and Dan Rhoden (Jenny), both of Martinsville, Indiana; sister, Joyce Ann Rhoden of Martinsville, Indiana; brother-in-law, John B. Forbes (Jenifer) of Waverly, Indiana, 4 nieces, 3 nephews, 1 great-niece, and 5 great-nephews all in Indiana. Marvin graduated from Martinsville High School (MHS) in 1965 where he was a 3-year letterman in track (shot put) and football. He was named MVP of the MHS football team for his senior year and received the 1965 HI-Y Sportsman Award from the Fellowship of Christian Athletes that same year. Marvin continued playing football at Indiana Central College in Indianapolis, as a defensive tackle and was named the team’s MVP Defensive Lineman his freshman year. He also made the All Hoosier College Conference 2nd Team and the Division II All American Team at the end of his freshman year. Marvin was drafted into the U.S. Army in 1966 and served two tours in Vietnam as a member of the 1st Logistical Command (1967-68 and 1970-71). Upon his return to Martinsville in 1971, Marvin joined his brother, Ken, coaching youth league football and basketball which changed the trajectory of his life. Marvin continued coaching in Martinsville until his family moved to Port St. Lucie in 1984 where he again coached little league football and in the local YMCA youth basketball league. In 1989, Marvin teamed with the Port St. Lucie High School basketball coaches to form the Jr. Jaguars youth basketball league patterned off the Little Arties youth basketball program in Martinsville. Starting with just 40 players the first year, the league grew each year and was ultimately transferred to be run by the City of Port St. Lucie’s Parks and Recreation Department where it now serves hundreds of children during two seasons each year. Upon his retirement as a supervisor with the City of Port St. Lucie’s Parks and Recreation Department, Marvin became a board member of the Port St. Lucie Police Athletic League (PAL). He also served as a voluntary scorekeeper for the Port St. Lucie High School varsity baseball team for 11 years. Living by his personal creed of “love God and try to make a contribution to the world”, Marvin continued his involvement in youth sports until his death. He was also affectionately recognized as one of Santa’s special helpers at numerous seasonal events during the past 20 years. A memorial/celebration of life service will be held at the Port St. Lucie Community Center located at 2195 SE Airoso Blvd. on Friday, January 14, 2022 with visitation beginning at 5:30 PM, and the service at 6:30 PM. In lieu of flowers, the family suggests donations may be made in Marvin’s honor to the Port St. Lucie Police Athletic League (PAL), 2101 SE Tiffany Ave., Port St. Lucie, FL 34952. Arrangements have been entrusted to the care of Haisley Funeral & Cremation Service, 2041 SW Bayshore Blvd., Port St. Lucie, FL 34984, (772-879-1000).

The family of Marvin Harold Rhoden created this Life Tributes page to make it easy to share your memories.

Send flowers to the Rhoden family.