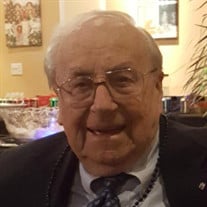 Martin “Marty” P. Foglia, 92, passed away on June 4, 2021 in Port St. Lucie, Florida. Marty was born in Bronx, New York on January 25, 1929 to Martin and Josephine Foglia. Marty was a proud Veteran of the U.S. Navy and earned his degree in Audio Engineering from the RCA Institute of Electronics. After being Honorably Discharged from the Navy, he became an Audio Engineer for the ABC Radio Network, where he retired after 40 years. Marty was the President of the Men’s club and Golf Club of King’s aisle. He was also a member of St. Bernadette’s Parish, and the Knights of Columbus. He was an avid golfer, card player, and gamer. He was also the proud owner of racing horses. Marty was a generous person spending time supporting local organizations such as the Notre Dame Catholic Ministries, Lifehouse, Hibiscus Children Center, as well as many of the local Food Pantries and Banks. He loved doing his puzzles every morning and taught his children who kept his tradition. He affectionately called his wife – Snappy. Marty was known by his friends as FO and by his family as Daddy, Poppy and Pops. He was a fun-loving kid at heart and had the best sense of humor. Marty was very witty, was always happy and kind and had the most positive attitude. Survivors include loving wife, Brenda Foglia of Port St. Lucie, FL; daughters, Joanne (Robert) Jones of Colorado Springs, CO, Rosemary Borawski of Jacksonville, FL; son, Martin (Paige) Foglia of Savannah, GA; daughters, Gina (Mike) Klaumenzer of Port St. Lucie, FL, and Bernadette (Doug) Rhodes of Melville, NY; son, Christopher Foglia of East Satauket, NY; sister, Anne Mastromonaco of White Plains, NY; brother, Henry (Yvonne) Foglia of Raleigh, NC; as well as 16 grandchildren, 11 great-grandchildren, and 1 great-great-grandchild. He was preceded in death by his daughter, Frances Mary Foglia; sister, Jean Sasso; and brother, Rudolph Foglia. A Funeral Mass will be held on Thursday, June 10, 2021 at 10AM at St. Bernadette’s Catholic Church 350 NW California Blvd Port St. Lucie, FL 34986. The Funeral Mass will be streamed live on St. Bernadette’s YouTube channel.

The family of Martin "Marty" Foglia created this Life Tributes page to make it easy to share your memories.

Send flowers to the Foglia family.