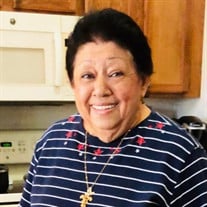 Maria “Merin” Julia Delgado was born on September 25, 1942 in Juncos, Puerto Rico. On February 1, 2022 surrounded by her daughter, family, and dear friends; she was reunited in God's kingdom with her parents, four devoted siblings and her dearly departed loved ones all eagerly awaiting her with open arms. Maria was the proud and youngest daughter of Ines Flores and Ramon Delgado. She moved to the Bronx in the 1950's, knowing she wanted a career in caring for the sick. In 1962, she graduated from Jane Addams Vocational High School with a course of study in nursing. Two years later, she received her license to practice nursing from the University of the State of New York. Nursing would be the only profession she held for 42 years; it was her divine purpose. In the 1970s, she worked at the VA in Brooklyn, caring for sick soldiers until she took a position with Knickerbocker Hospital in Harlem. While serving the primarily poor and immigrant patients of Knickerbocker Hospital, Maria’s heart of gold, character of decency, and smile lit up rooms and uplifted lives. In the 1980s, she started working at Methodist Hospital in Brooklyn, where she remained until her retirement in 2004. During her time in Brooklyn, Maria bought a beautiful 3 story brownstone and became a landlord, oftentimes renting her two-bedroom apartments for next to nothing. She married and had one child, Dawn, who was her tremendous admirer. In 2006, she sold her home in Brooklyn, and moved to Port St. Lucie, Florida. In her retirement years, Maria enjoyed gardening, reading the newspaper, spending time with her dear friends, and simply enjoying life. Everywhere she went she gained a friend. She would say everyone was special and deserved respect, from the person cleaning the floors to the person who owned the building. She was a modest woman, generous and full of love. During her time in Florida, she met a young woman, Heidi, who walked and trained her dogs. Heidi quickly became like a granddaughter and as such Maria soon adopted the title of 'Abuela'. The bond that she had with her daughter, Dawn, was one unlike any other, and many marveled to see. They were immensely proud of each other and talked every single day. She is survived by her husband Wahid, daughter Dawn, granddaughter Heidi, and the countless lives she touched during her 79 years on Earth. She will be missed, but never ever forgotten. She is in every sunrise and sunset and in the hearts of us all. Friends and family are invited to send memorial contributions in Maria’s honor to one of her favorite charities: St. Jude Children’s Hospital, https://www.stjude.org/donate/; World Vision, https://www.worldvision.org/donate; Save the Children, https://www.savethechildren.org/; American Humane Society, https://www.americanhumane.org/; Red Cross, https://www.redcross.org/donate/donation.html/. A graveside service will be held at Rolling Oaks Cemetery on February 14, 2022 at 2 PM.

Maria &#8220;Merin&#8221; Julia Delgado was born on September 25, 1942 in Juncos, Puerto Rico. On February 1, 2022 surrounded by her daughter, family, and dear friends; she was reunited in God's kingdom with her parents, four devoted siblings... View Obituary & Service Information

The family of Maria "Merin" Delgado created this Life Tributes page to make it easy to share your memories.

Send flowers to the Delgado family.