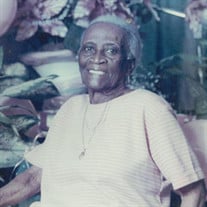 Marguerite Philoria Honora ‘Philo’ was born on August 20, 1921 to her mother, Jeannistine Jannite and father, Lorama Honorat in Port Margot, Haiti. She was a smart businesswoman; who was well known within the community for her generosity, kindness, genuineness, and candor. Her pride and joy were her children whom she loved dearly and dreamed of a successful future for them all. With that dream, Philo left all she had in Haiti and moved to the United States on July 20th, 1976, to set a foundation for a better future for her children. This selfless act led to more than one dozen family members migrating from Haiti to the United States in the years to follow. She became a Naturalized Citizen December 20th, 1997. In Hillside, NJ, Philo was known as ‘Grandma’ and ‘Gama’. She served as the neighborhood babysitter, who would ensure the kids are well fed, well-behaved, and well-versed into the Haitian culture – there are several American children whose first language was ‘kreole’ thanks to ‘Gama’. She also continued her entrepreneurship as the neighborhood knew her to sell the best candy and kola lakay. Philo loved to cook, enjoyed going to church services, and spending time with her family. Philo was loved by many and will never be forgotten. She was not only the matriarch, but the family hero whose strength, determination, faith, and wisdom will continue to serve as an encouragement and inspiration for generations. Philo departed this life on October 18th, 2021 at the age of 100. What a blessing to have been on this earth for a century. She leaves to cherish her memories six surviving children; three of which she gave birth to: Gabriel Delano Dejoie, (Elsy Dejoie), Jean Ba Montilus (Elmase Montilus), and Jean Louis Montilus (Evanne Montilus). Predeceased by three of her beloved children, Charlot Morvin, Jocelyn Antonine Jerome, and Jean Sezard Montilus. Eighteen grandchildren; forty-one great grandchildren; seven great, great grandchildren; and a host of nieces, nephews, relatives, and many dear friends. A visitation will be held on Saturday, October 30, 2021 from 11AM to 12PM with a service to begin at 12PM at the Haisley Tribute Center 2041 SW Bayshore Blvd Port St. Lucie, Fl 34984. Burial will follow at Rolling Oaks Cemetery. A repast will be held at the Haisley Tribute Center following the family time at Rolling Oaks.

Marguerite Philoria Honora &#8216;Philo&#8217; was born on August 20, 1921 to her mother, Jeannistine Jannite and father, Lorama Honorat in Port Margot, Haiti. She was a smart businesswoman; who was well known within the community for her generosity,... View Obituary & Service Information

The family of Marguerite "Philo" Honora created this Life Tributes page to make it easy to share your memories.

Send flowers to the Honora family.