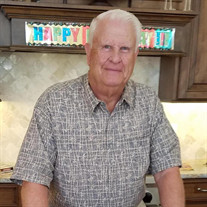 Marcus Joseph Johnson, 80 years old, of Port Saint Lucie, FL, passed from this life on April 8, 2022. He was born on December 31, 1941, to Herbert and Dorothy Johnson in Skokie, IL. Marcus attended Niles Township High School East, graduated from the United States Merchant Marine Academy, Kings Point, and served as Commissioned and Warrant Officers of the United States Naval and Reserve. He went on to receive his M.B.A. from Seattle University. In 1994, Marcus was awarded the Outstanding Professional Achievement Award by Kings Point, for exemplifying their motto, “Acta Non Verba,” or “Deeds Not Words,” by attaining personal achievement in his chosen field. Marcus carried this into his personal life with the love, generosity, and many acts of service he bestowed upon his family and community. He married the love of his life, Connie Johnson (Price) on November 28, 1964, and they had two sons, Marc and Eric. A perfect pair for fifty-seven years, Marcus and Connie created a life and a family built on laughter, love, and a lot of construction and design projects. He worked as a Vice President of Sea Operations at Sea-Land Service, Inc., and as the President/CEO of New Sulzer Diesel US, and finally retired as a Consultant at Autronica. He was an avid golfer and loved renovating houses. So many houses! Marcus is survived by his loving wife, Connie Johnson, his sons, Marc Johnson and Eric (Michele) Johnson, his two grandsons, Tyler Johnson and Jack Johnson, and his sister, Lynn (Bill) Pouncey. He is also survived by many nieces, nephews, family, and friends. He was preceded in death by his parents, Herbert and Dorothy Johnson. In lieu of flowers, the family asks that you donate to your local no-kill animal rescue or shelter.

The family of Marcus J. Johnson created this Life Tributes page to make it easy to share your memories.

Send flowers to the Johnson family.