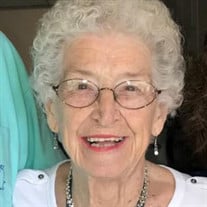 Marcelline (Pat) Ghiotti 1922 -2021 On January 11th, we lost the Matriarch of our family. Marcelline (Pat) Ghiotti led the most fascinating life! We had hoped to have a grand 100th Birthday Party in 2022, but she decided that 98 1/2 was enough, and that she was ready to join Joe, the love of her life, at the South Florida National Cemetery. Born in 1922 in Nashua, New Hampshire to French-Canadian parents Eva Audet Laurier and Charles Albert Laurier, Pat grew up speaking fluent French. She excelled in athletics as captain of her Field Hockey team and she adored her older brother, Carl. Carl had been told by their Mom that she was bringing him a special “package”. When his little sister arrived, he called her “Packy” which eventually became Pat. So, although her parents named her Marcelline, she went by Pat her entire life. Pat’s father, Charles Laurier, was the much much younger brother of Sir Wilfred Laurier, who was the first Canadian-born Prime Minister of Canada. Pat was also part Native American of the Quebec Cree Tribe. Pat lost both her Father and her Mother by aged 14. At her Mom’s funeral she met a maternal Uncle and Aunt for the first time, who took her that day to live with them in Newburgh, NY. In a strange place with strange people, she still managed to thrive through high school. It was there that she met and married Joe Ghiotti, eloping in 1940 across the state line into Pennsylvania at age 18! Pat and Joe had four children but lost one before age two. Pat raised her two sons and her daughter, plus helped her daughter, Bonnie, raise her two children as a single mother. She taught Joe & Mike & Bonnie, and Bonnie’s sons, Eric & Eddie that family was the most important thing in life. Pat and Joe made the Newburgh area their home until 2001 when they followed their eldest son and his wife to Fort Pierce, Florida. They fell in love with the beach and the warm weather. Pat & Joe celebrated their 70th anniversary in 2010, before Joe passed away the following year. In spite of all the trials Pat had overcome in her lifetime, this was the largest obstacle she had ever faced. But she eventually forged ahead and moved into Lake Forest Park Assisted Living late that year. Although Pat had little formal education, she was such an avid reader that she was an incredibly learned lady. She loved crossword puzzles. To the end of her days, Pat did the NY Times puzzle in ink every day. She was very competitive her entire life, from school sports to party games! So, she thrived and she won at Rummikub, and Bingo, and joined the Men’s poker game until they chose to not include her anymore because she kept taking home the pots! Pat was predeceased by her parents, Charles A. Laurier and Eva Audet Laurier, and by her brother Carolus (Carl) Laurier. She is also predeceased by her husband of seventy plus years, Joseph John Ghiotti, Sr., and her daughter, Bonnie Lee Ghiotti. She is survived by her son, Joseph J. Ghiotti, Jr., and his wife, Terri Leone, and by her son Michael L. Ghiotti and his wife, Susan Gibney Ghiotti and by her daughter, Bonnie Lou Ghiotti Borden. She is also survived by her grandchildren; Eric Gandossy, J.J. Ghiotti III, Craig A Ghiotti (Lori Ghiotti), Edward Borden (Nathalia Borden), Michael Ghiotti (Carrie Ghiotti), Amanda Ghiotti Deems (Joel Wiltgen), and Matthew Ghiotti. In addition, Pat is survived by nine Great-Grandchildren, and by eight Great-Great- Grandchildren. The family would like to thank Treasure Coast Hospice for their considerate care in Pat’s last days. And the family would encourage donations to Treasure Coast Hospice in lieu of flowers. Treasure Coast Hospice Foundation, 1201 SE Indian Street, Stuart, Florida. 34997. Or online at www.treasurehealth.org Mostly, the family would like to acknowledge and thank the management and entire staff of Lake Forest Park Assisted Living for their exceptional care and friendship over the last ten years - especially during this trying time of quarantine and isolation. Thank you so much. A Prayer Service will be held on Friday, January 22 at 3:00 pm at Haisley Funeral Home - 3015 Okeechobee Blvd, Fort Pierce, Florida.

The family of Marcelline (Pat) Ghiotti created this Life Tributes page to make it easy to share your memories.

Send flowers to the Ghiotti family.