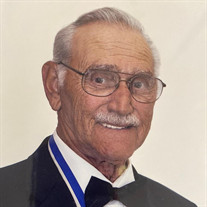 Louis Riccardo Truppa Jr., 85, of Port St. Lucie, Florida passed away peacefully at his home on December 16, 2021. Louis was born March 12, 1936 in Rahway, New Jersey to Louis Truppa and Vincenza Zambardi. Louis graduated from Rahway High School and then enlisted in the United States Army. Louis married his loving wife Margaret Ann Caporaso November 22, 1964 at St. Anthony’s Roman Catholic Church in Elizabeth, New Jersey. Louis went to Barber School in New York and was the owner of Lou’s Barber Shop for many years. He also worked for the United States Postal Service until he retired. For twenty years he worked security for the New York Mets Spring Training Camp, as well as for the St. Lucie Mets. He was an active Parishioner at St. Lucie Catholic for 23 years, he sat on the Finance Committee and was a Eucharistic Minister. Louis joined the Knights of Columbus in 1973, where he held several positions as high as the Faithful Navigator. At the time of his passing, he was a 4th degree Knight. An active member of his community, he coached Pop Warner Football for over 20 years. Louis enjoyed spending time woodworking. Survivors include devoted wife, Margaret Truppa of Port St. Lucie, FL; son, Louis Truppa, III and wife, Margaret of Iselin, New Jersey; daughter, Vincentina Luciano and husband, Joseph of Jensen Beach, Florida; grandchildren, Nicole Murawski of West Palm Beach, FL, Louis Truppa IV of Iselin, NJ, and Leanna Murawski of Tampa, FL; siblings, Ann Cunicella, Loretta Syko, and Eugene Truppa. He was preceded by his parents, Louis and Vincenza Truppa; and siblings, Gloria DiPaolo and Arcangelo Truppa. Memorial Contributions may be made in his honor to the American Cancer Society at https://www.cancer.org/involved/donate/memorial-giving.html or by calling 1-800-227-2345. A memorial mass will take place on Saturday, January 15th at 11 AM at St. Lucie Catholic Church. He will be placed in South Florida National Cemetery in Lake Worth, FL on January 18th at 12:30 PM.

The family of Louis Riccardo Truppa Jr created this Life Tributes page to make it easy to share your memories.

Send flowers to the Truppa family.