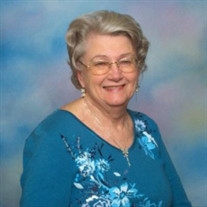 Louie Ruth Cannon Smith (1926 – 2021) Ruth Smith passed away on March 30, 2021 in Rock Hill, SC. Ruth was born on March 2, 1926 to the late Noble Cannon and Adalene Easton Cannon in Lawton, Oklahoma. Ruth was the eldest of the five Cannon children, with two sets of twin brothers. Ruth graduated from Lawton High School and married Ralph Vernon Smith of Lawton, Oklahoma on March 12, 1944. They were married for 47 years until Ralph’s passing in 1991. Together they raised four children and would eventually have eight grandchildren, 12 great grandchildren and 3 great-great grandchildren. Ralph was a Chief Warrant Officer in the US Army and commanded an Army band from Fort Sill, OK. Ruth traveled with him to Japan and Germany (twice) among several other assignments in the United States to raise their family. They retired in Fort Pierce, Florida. Ruth always had a keen sense of humor and enjoyed spending time with family and friends. Ruth was active in the Presbyterian Church as a choir member and Women's Circle member. She pursued healthy foods and activities which helped to keep her in good health into her ‘90’s. Ruth loved her children and grandchildren and her dogs and cats. Ruth was preceded in death by her husband, Ralph and her eldest son, Robert Smith of Lawton, OK, grandson Robbie Smith of Tuscaloosa, AL and great grandson Jonathan Hufford of Gatesville, Texas. She is survived by children, Donald Smith of Fort Pierce, FL; Cindy Fritz (Ed) of Fort Mill, SC; Kitty Robb of Broomfield, CO; eight grandchildren, 12 great grandchildren and 3 great-great grandchildren. A service will be held on Wednesday, April 14, 2021 at 11:00 AM at Indian River Presbyterian Church, Fort Pierce. Burial will take place at Hillcrest Memorial Gardens. In lieu of flowers, please send donations to the Indian River Presbyterian Church Choir or to the St. Jude’s Children’s Hospital.

The family of Louie Ruth Cannon Smith created this Life Tributes page to make it easy to share your memories.