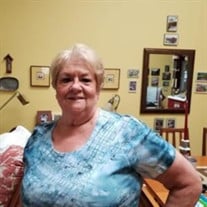 Linda Sue Ray Linda, 72, passed away peacefully on April 27, 2022, at Treasure Coast Hospice in Fort Pierce, FL surrounded by her loving family and friends. She was born on November 30, 1949, in York, PA to William and Helen Mundis. Linda and her parents later moved to Hollywood, Florida, when Linda was 12 and Jody was 3. After losing her husband is 2002, she relocated to the Treasure Coast to be closer to family. She later moved to Lake Placid with her dear friend that she has known since a young age, Linda Rentz. Her family brought her back to the Treasure Coast where they could support her and spend more time with her. Linda is survived by her daughters Kristi (Troy) Donnelly, and Sheri Usrey (Ace Oglesby), both of Fort Pierce, Florida. Her sister Jody Owens of Vero Beach, Florida. Her cousin Ed Strayer (who was like a brother to her growing up), of Jensen Beach. Grandchildren: Andrew (Kasia) Donnelly, Meagan (Dakota) Fennell, Brooke (Evan) Ridle, and Travis Usrey. Great grandchildren: Emma and Austin Donnelly, Presley Fennell (Kinsley Fennell, coming in August), Layne and Landyn Ridle. Preceded in death by her husband; Warren Ray, Parents; William and Helen Mundis, and son in law; Jeremy Usrey. She will be greatly missed by family and friends. The family will be having a Celebration of Life at a later date. Don't cry for me, I'm not gone. My soul is at rest, my heart lives on. Light a candle for me to see and hold on to my memory, but save your tears for I'm still here, by you side through the years.

Linda Sue Ray Linda, 72, passed away peacefully on April 27, 2022, at Treasure Coast Hospice in Fort Pierce, FL surrounded by her loving family and friends. She was born on November 30, 1949, in York, PA to William and Helen Mundis. Linda... View Obituary & Service Information

The family of Linda Sue Ray created this Life Tributes page to make it easy to share your memories.

Send flowers to the Ray family.