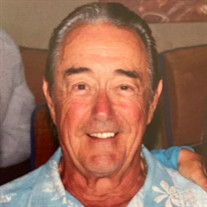 Lew was born in Tacoma, Washington on June 8, 1938, and died peacefully in Port St. Lucie, Florida on May 7, 2021, at the age of 82, surrounded by his loving family. Lew spent his childhood in Berkeley, California (where he attended Berkeley High) and Tacoma, joining the US Navy at 17. He proudly served in the Navy and Army for 23 years, which included service in Vietnam and participation in top secret communications assignments, earning numerous service, good conduct, and campaign medals, a meritorious service medal, a Joint Chiefs of Staff badge, and a bronze star medal. Lew’s participation in the first crews manning the Moscow-Washington hotline earned him an opportunity to attend Mount Saint Mary’s College, where he graduated with a degree in electrical engineering. Lew followed his military career in the private sector with Harris Corporation and other companies working on satellite and airport communications, where he traveled the world, building airport communication, logistics, and security systems in Korea, Thailand, and Malaysia. He is survived by his loving sister and sister-in-law, Kamille Kallas and Karen Harris, his children Tony Jacobson, David Jacobson, Angela Jacobson, Dana Zehner, and Richard Jacobson, and their spouses Teresa Jacobson, Tina Jacobson, James Levine, David Zehner, and Jeannie Jacobson, and his grandchildren Brad Jacobson, Jenna Rahll, Kelly Jacobson, Holly Jacobson, Nicholas Zehner, Devyn Jacobson, Cody Levine, Jake Zehner, Sadie Levine, Antonio Jacobson, Aaden Jacobson and the mother (Linda McLean) of Angela, Dana, and Richard, and his sister-in-law, Teresa Daniels, and her children Tracy, Geoffrey and Gary Daniels as well as many cherished relatives in Washington state and the surrounding area, and his sweet loyal companion, Peanut. He is predeceased by his mother, Ruth Marilyn Johnson Kallas, and his stepfather, Irving William Kallas, his father, Harris Lewis Jacobson, and his first wife, Eleanor (‘Laura’) Rebello Jacobson, mother of Tony and David Jacobson. Lew had an incredible passion for all genres of music and playing and watching golf, world travel, and cooking exotic meals he learned from his travels. He was also an avid reader, pool shark and enjoyed fishing. He loved spending time with his children and grandchildren. He was a die-hard Redskins fan, and in his earlier years, a champion bowler for the Navy, Ferrari lover and rebuilder of car engines, and took a lot of pride in the Kelmark GT kit car he built at home. He will be profoundly missed, and forever loved in our hearts. In lieu of flowers, memorial donations (either mailed checks or online donations) will be graciously accepted in the memory of Lewis Jacobson at: Treasure Coast Hospice 1201 SE Indian Street Stuart, Florida 34997; www.treasurehealth.org or the American Cancer Society at www.cancer.org or (800) 227-2345. A memorial mass will be held on Saturday, June 26, 2021 at 10AM at St Bernadette Catholic Church 350 NW California Blvd Port St. Lucie, Fl 34986. St. Bernadette's will stream the Memorial Mass at https://youtu.be/NwNbHvsLoME

Lew was born in Tacoma, Washington on June 8, 1938, and died peacefully in Port St. Lucie, Florida on May 7, 2021, at the age of 82, surrounded by his loving family. Lew spent his childhood in Berkeley, California (where he attended Berkeley... View Obituary & Service Information

Send flowers to the Jacobson family.