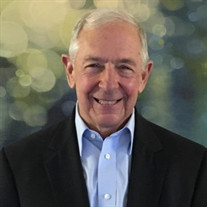 Lee E. “Pete” Muschott died unexpectedly from complications of recently diagnosed mesothelioma on September 20, 2021. He was known and loved for his keen sense of humor, friendship, outstanding memory, passion for his work and love for his family. Born in Normal, Illinois, his family moved to Gulfport, Florida, when Pete was in the 3 rd grade. There he formed lifelong friendships, managed to stay out of too much trouble, and graduated from Boca Ciega High School. Pete loved telling stories about his adventurous youth which usually included rebuilding old cars with his friends and riding motor bikes. Although Pete initially wanted to be an engineer, he showed more aptitude for practicing law. The family cherishes a copy of his lawn mowing contract written at age 12. When his high school guidance counselor suggested he study law, Pete always recalled, “At that point in my life I had endured a series of crummy jobs to support my hot rod car and motorcycle habit. I knew two things about being a lawyer: you could work for yourself, and you came home at the end of the day almost as clean as you were when you left in the morning. That was good enough for me.” Pete graduated from St. Petersburg Junior College and then went on to Florida State University, graduating in the spring of 1967. He was thrilled to be accepted to Stetson Law School in Gulfport. Much to Pete’s dismay, midway through his studies at Stetson, the Selective Service discontinued graduate student deferments. Rather than being sent to Vietnam, Pete joined the Air Force where he met his beloved wife of 49 years, Kathie, an Air Force officer. He would often say that meeting and marrying her was the best thing that ever happened to him. Pete received an early honorable discharge from the Air Force and was able to pick up his law studies just where he had left off. Graduating from Stetson in January 1974 (cum laude), he was number one in his class. He was admitted to the Florida Bar in 1974 and practiced law in Fort Pierce for 47 years. He truly loved his career and took great pride in his work. Among many legal awards and honors, he was especially proud to be rated AV Preeminent in a peer-reviewed rating in 2013. This rating was the highest possible in both legal ability and ethical standards. Pete enthusiastically enjoyed being the Chair and Immediate Past President for the Solo & Small Firm Section of the Florida Bar and presenting seminars for the Defense Lawyers Association (including “Defending Motorcycle Crash Claims – An Introduction to the Two-Wheeled Universe”). Pete found his Zen in motorcycle riding, both on and off road. Always up for a good adventure, Pete and Kathie traveled across the United States, Canada, Europe, and New Zealand. Pete would always have to stop along the way to check his maps even though Kathie was the designated navigator. He was the “Esteemed Fearless Leader” of a group of dirt bike riders dubbed the “Skunk Ape Scientific Research Team”. He would, on occasion, trade two wheels for four. He loved co-piloting with his friend, Dr. Ed Scheel, on their Jeep Jamborees and numerous other adventures. As a life-long “gear-head”, Pete relaxed by spending hours discussing cars and motorcycles as well as attending races and car shows. Blessed with an incredible memory, he often knew more about the old cars than the owners. Alongside the law journals and files in his office are stacks of Hot Rod and Cycle World magazines. He could always pick out a classic car or hot rod and would tell you specific details about it including how long that particular engine configuration was produced. Above all else, Pete was a dedicated and loving husband to Kathleen, beloved father to Jennifer Muschott-Cuti, Marissa Muschott Martin and son-in-law Anthony Martin IV, and proud grandfather to Luke, Annalea, and Eva Cuti, and Anthony “Quinn” and Elizabeth Martin. He loved teaching his children and grandchildren to ride bicycles as a natural stepping stone to motorcycling. With daughter Jennifer riding alongside, he took to twisty mountain roads as well as dirt bike riding in the woods of Florida. He was a proud Grandpa to have grandson, Luke, riding on the back of his KLR as co-captain of off-road rides. Inspired by his father’s barnstorming escapades, Pete reveled in sharing piloting and flying experiences with his oldest daughter, Marissa. As a proud grandfather, he loved watching Eva twirl her batons, Luke and Annalea play soccer and musical instruments, and Lizzie dance in her recitals. When his grandson Quinn took up the trumpet just as he had, Pete would get weekly updates. He thoroughly enjoyed watching Quinn’s school concert. Pete’s well-known sense of humor was reflected in his work and everyday life. He delighted in finding absurd news stories to share with his family and friends, along with his version of the headlines. His laughter could often be heard across the house or the office (particularly when wearing his “rant robe”). Although Pete had several favorite sayings, his favorite motto was: “No amount of planning will ever replace dumb luck.” His family thanks his trusted legal assistant, Kathy Caruana, and attorney Michael Fowler for their work in closing Pete’s law practice. Pete had hoped treatment would give him more time; his sudden passing was unexpected. A Celebration of Life will be held October 16th at 1:00 pm at Haisley Funeral Home in Fort Pierce. Remembrance donations can be made to Moffitt Cancer Research at Moffitt.org/give.

Lee E. &#8220;Pete&#8221; Muschott died unexpectedly from complications of recently diagnosed mesothelioma on September 20, 2021. He was known and loved for his keen sense of humor, friendship, outstanding memory, passion for his work and love... View Obituary & Service Information

The family of Lee E. "Pete" Muschott created this Life Tributes page to make it easy to share your memories.

Send flowers to the Muschott family.