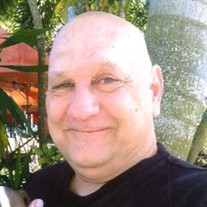 Lawrence Wayne Polk, Jr. went home to sleep in the loving arms of his Savior on December 30, 2021. He was known all over Fort Pierce as “Larry the Barber”. People would come to his barber chair to hear his philosophy on life, dogs, good food, and possibly a name for their haircut. Clients that would sit in his chair never knew what he was going to use as a topic for discussion that day which always made it entertaining. Larry was born and grew up in Fort Pierce. He attended church school at JES Seventh-Day Adventist School until he graduated 8th grade and then he attended Palm Vista Christian School until he graduated. Larry worked with this father, Lawrence W. Polk, Sr. after graduating until he decided to follow in his mother’s footsteps, Georgiana Polk, into a career in barbering. Larry worked in his family’s Barber Shop for many years and discovered yet another adventure in Culinary Arts. He graduated top of his class at Virginia Tech in Fort Pierce. Larry’s next adventure took him back to school in the St. Lucie School District as the new “lunch lady” as Larry jokingly told his friends. He enjoyed working in the food service industry serving the children and entertaining his coworkers, many of which became family to him. Larry is survived by his mother, Georgiana Polk; sisters, Terri Polk, Lori Polk Candee; nephews, Rick Shearer, Jr., David Candee, Rayce Candee, Patrick Connor, Brandi Falzone, Bambi Baker, grand nephews and nieces, Ian Barnard, Blaine Barnard, Bailee Falzone, Nathan Penn, Dashtan Bush, Sariah and Carina Conner, Sidney and Sierra Candee. Larry was preceded in death by his father, Lawrence W. Polk, Sr., sister, Regina Polk, brother, Rayce Polk, and numerous cousins, aunts and uncles. A Celebration of Life will be held at Fairlawn Baptist Church on January 15, 2022 at 3:00 PM. All are welcome to attend.

Lawrence Wayne Polk, Jr. went home to sleep in the loving arms of his Savior on December 30, 2021. He was known all over Fort Pierce as &#8220;Larry the Barber&#8221;. People would come to his barber chair to hear his philosophy on life, dogs,... View Obituary & Service Information

The family of Lawrence Wayne "Larry" Polk Jr. created this Life Tributes page to make it easy to share your memories.

Send flowers to the Polk family.