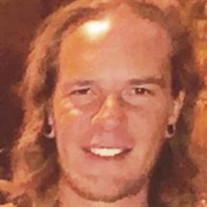 Lars Vinjerud III Lars Vinjerud III, [38] of Fairhaven, MA, passed away at home after a brief illness in Martin County, Florida. Lars was the loving father to two beautiful children, Lars Vinjerud IV and Ella Rae Vinjerud. Lars was born on October 2, 1983. He was the son of Virgina May Allen and Lars Vinjerud II. Lars was born in New Bedford and resided in Fairhaven most of his life until recently moving to Florida. Lars was a 2001 graduate of Fairhaven High School. He obtained his Maritime Certification from Northeast Maritime Institute in Fairhaven, a graduate of the Coast Guard Fire Academy and a certified diver. Lars was employed by Fleet Fisheries for 20 years. He was the manager of Fleet Marina. Lars dearly loved and adored his children. They were his pride and joy, he truly enjoyed being their dad and spending time together. Lars had many hobbies which included skateboarding, boating, re-building cars, and motorcycles. He was an avid scuba diver. He was a member of various local pool leagues. Lars is survived by his two children, Lars Vinjerud IV and Ella Vinjerud, their mother, Jessica Desroches, his parents, Virginia Allen, Lars Vinjerud II, his sister, Lisa Vinjerud, brother Leif Vinjerud, stepmother Dunia Vinjerud and stepsister Alicya Vinjerud, his paternal grandparents Lars Vinjerud I and the late Kathleen [Cassie] Vinjerud, maternal grandparents, Diane Johnson and the late Franklin A. Allen, a niece, Freya, two nephews, Odin and JJ, his uncle Martin Johnson and wife Angela of New Bedford, his aunts Lynn Wright of Fairhaven, Mary Rich of Scarborough, Maine, Kate Remney of Portland, Maine, Linda Vinjerud of Woodbridge of New Jersey, many cousins, and friends. Lars was the nephew of the late Steve Allen, Buster Allen, Richard Dubowick, and Mary Greeley. Lars will be missed by many. His memorial service will be planned at a later date.

The family of Lars Vinjerud III created this Life Tributes page to make it easy to share your memories.

Send flowers to the Vinjerud family.