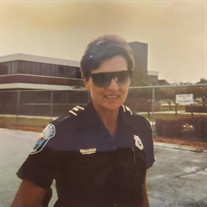 June Sweetland was born April 19, 1944 to Edward and Rose Sweetland in Flushing New York. In the early 1960’s June moved to Florida with her family and settled in Palm Beach Shores. During her high school years, she worked in the family business as a waitress at the popular Sailfish Center Marina also in Palm Beach Shores. In 1968 she enlisted in the United States Marine Corp and went through basic training, unfortunately due an injury she was released from the Marines Corp and given an honorable discharge. After coming home, she went to work for Riviera Beach Police Department as a clerk typist and soon transferred to a position as a police dispatcher. June was a popular employee at the department and at the suggestion of a co-worker enrolled in the Police Academy. In 1972 she graduated and became the cities first female police officer. Her first assignment as a sworn officer began in the detective division where she worked cases that involved sexual assault, fraud, and worthless checks. From there she was assigned to property control and then as a desk sergeant in the communications section. Upon passing the Lieutenants exam and being promoted she was put in charge of the departments Internal Affairs section as well as being instrumental in obtaining official accreditation status for the police department. Her final assignment with the city was as a road patrol shift commander. Her expertise and attention to detail were just a few of the attributes that helped her be successful. In addition to this, she was not afraid to work hard but still took time for an occasional prank. She was well liked and praised by all who worked for her and with her. June retired from the force in 1994 and moved to North Carolina to be with her daughter after the birth of her first grand daughter, however after a particularly cold winter she moved back to Sunny and warm Port Saint Lucie to care for her mother. Her greatest joy in retirement was the time she spent with her grandchildren and then with her great grandchildren. When the kids were little, she would always make time to take them to the parks, or swimming and do arts and crafts with them. As they grew older the trips to the parks changed into lunches at her favorite restaurants and the much loved and looked forward to Sunday night family dinner at her daughter’s house. She is survived by her daughters, Janet Sweetland Greene (Craig) and Jennifer Soto (Michael); grandchildren, Kassandra, Kayla, Kevin, and John Greene , Rick Rodberg and three great grandchildren, Emma, Jacob and Ava Grace. Everything June did she always did to the best of her ability. Her bravery to attempt careers that for women were unheard of at the time proved to be inspirational to other women who came up behind her. In one of the articles written about her in the newspaper she was labeled as a trailblazer, and she truly was. A gathering will be held on September 25, 2021 from 2PM to 4PM with a Memorial Service to start at 4PM at the Haisley Funeral Home 3015 Okeechobee Rd Fort Pierce, FL 34947.

June Sweetland was born April 19, 1944 to Edward and Rose Sweetland in Flushing New York. In the early 1960&#8217;s June moved to Florida with her family and settled in Palm Beach Shores. During her high school years, she worked in the family... View Obituary & Service Information

The family of June E. Sweetland created this Life Tributes page to make it easy to share your memories.

June Sweetland was born April 19, 1944 to Edward and Rose Sweetland...

Send flowers to the Sweetland family.