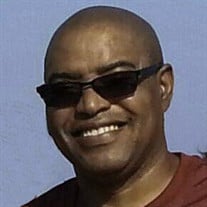 Juan A. “Bebo” Calderon, 65, of Port St. Lucie, Florida passed away suddenly March 3, 2022 in Fort Pierce, Florida. Bebo was born January 30, 1957 in Santurce, Puerto Rico. He graduated from High School in Puerto Rico. Bebo moved to New York in 1981 and attended Boricua College in Brooklyn, New York. Bebo met the love of his life, Eda in 1983 and they were married on May 20, 1989. They moved to Florida in 1994. He worked in Shipping and Receiving for CIT in Fort Pierce, FL for over 21 years and retired in 2021. Bebo loved to garden, creating beautiful habitats for butterflies. He was an avid sports fan; loving to play baseball and golf (even though his handicap was very high). He also enjoyed watching football and boxing. Bebos loved music and dancing, he was particularly fond of classic salsa and disco music. He loved to travel with his wife and extended family, traveling to exotic locations. He was an avid Star Wars fan and enjoyed watching movies and had an extensive movie collection. Bebo and his wife, Eda enjoyed having friends over an introducing them to their many table games. Scuba diving and snorkeling were also among his enjoyed pastimes. Survivors include, his beloved wife, Eda R. Torres of Port St. Lucie, Florida; sisters, Ana I Calderon of Florida; Angela Calderon of Alabama; brother, Victor Eugenio Calderon of Puerto Rico; sister, Zoraida Calderon of New York; aunt, Casilda Pillot of Puerto Rico; cousin, Casilda Lefebres and Jeffrey Rodriguez Bebo’s childhood friend; Christian and Jenniffer Rodriguez, Jefrey Rodriguez, Jr, all of Puerto Rico. A visitation will be held on Saturday, March 12, 2022 from 2 PM to 4PM with a Prayer Service to begin at 4PM at Haisley Funeral and Cremation Service Tribute Center 2041 SW Bayshore Blvd Port St. Lucie, Florida 34984.

The family of Juan "Bebo" Calderon Pillot created this Life Tributes page to make it easy to share your memories.