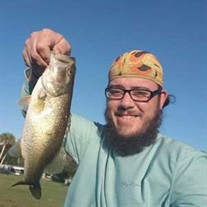 Joseph Arthur “Joebob” Senneville Joseph Arthur “Joebob” Senneville, 32, of Fort Pierce, Florida passed away on September 24, 2021. Joebob was born on July 15, 1989 in Annapolis, Maryland to Robin Senneville and Robby Paquette Jr. He moved to Fort Pierce, Florida in 1990. He was in teen anglers, ROTC and played soccer at Westwood High School. He graduated in 2007. He lived to fish, till the day he left us. Joebob leaves behind the love of his life Elissa Senneville, which he married on November 3, 2018. His 4 stepsons, Timothy Schichtel, Ian Schichtel, John Minnick III, and Logan Farmer. Joebob had a daughter Emmalynn Rae Rinehart, 6, that he would have loved to watch grow up. He also leaves behind his mother Robin Senneville, his father, Robby Paquette, Jr, his stepfather, Ed Seissiger, Jr. and his maternal grandmother, Peggy Senneville. The celebration of life will be 10/16/21 at 4902 King's hwy. Lakewood Park pub from 2-5 pm. . Benefit for the Senneville family yet to be determined.

The family of Joseph Arthur "Joebob" Senneville created this Life Tributes page to make it easy to share your memories.

Send flowers to the Senneville family.