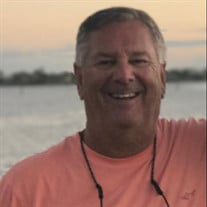 Jon W. Ankney December 23, 1948 – August 25, 2021 ,Jensen Beach, Florida. Jon W. Ankney passed away suddenly at his home on August 25, 2021. Jon was born in southern Ohio on December 23,1948 to John and Vera Ankney. He attended Fairmont High school in Kettering, Ohio and attended College in Kentucky where he played his favorite sport football for 4 years as a tight end. Jon was raised in the Food Service Industry. Jon and his family owned and operated several restaurants during his lifetime. Later Jon became the National and International Director of Sales for a National Food Service Equipment Company. Jon took his expertise and started Ankney and Associates a food service sales and consulting company. Jon married the “the love of his life” Dawn August 8, 1999. They lived in Chapin, South Carolina before moving to Jon’s beloved Florida full-time in 2014. Jon was known by his closest friends as “BIG Guy,” and he was larger than life to the people closest to him. Jon loved all his children and adored his grandchildren. Other than “Dad” his favorite title was “Pappy.” One of Jon’s favorite things to do was to offshore fish with his family and taking his friends out for the day on the boat. He loved watching his favorite team The Florida Gators, playing golf with his son Lawson and friends, especially since he usually won. Over the last several years Jon enjoyed attending Christ Fellowship Church, he became closer to the Lord and wanted everyone else to. He will be dearly missed by his family and friends, they loved him so much. In lieu of flowers the family would like memorials sent to The Light House Café Ministries, PO Box 220, Pahokee, Fl 33476 or on their Facebook page or The Gary Sinise Foundation. Survivors include his Wife Dawn Hawkins Ankney of Jensen Beach His Children and Grandchildren: Jason Adam Ankney, (Molly,Edmund, Parker, Robert, Simon and Sam) Beaufort SC, Jamie Ankney Whitlock, (Scoot, Charlie and Livie) Greenville, SC, Jill Ankney Shellenberg ( JJ, Avery and Stephen) Columbia, SC, Abbie J. Benthall Gold Hill, OR, Sydney B. Benthall, Charleston, SC, William Lawson Benthall, Ft. Pierce, FL. To honor Jon’s wishes his family will be holding a private memorial service at a later date.

The family of Jon W. Ankney created this Life Tributes page to make it easy to share your memories.

Send flowers to the Ankney family.