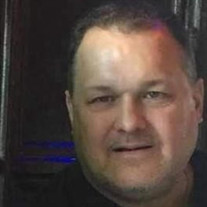 John R. Wahl Jr. of Fort Pierce, FL unexpectedly passed away on Sunday April 18, 2021 at his home in Fort Pierce. John was born February 16, 1962 in Cheverly, Maryland. He spent much of his formative years in Laurel, Maryland before moving to Calvert County, Maryland. He graduated in 1980 from Northern High School (Owings, Md) where he was a member of the Varsity Basketball Team. After high school, he became a commercial and residential painter as part of the painter’s union. After ending his career as a painter, he moved to Florida to be near family and settled in Fort Pierce, Florida. He was known by friends and family as an avid sports fan. If you entered his home, sports were on his television and he was in his recliner with a smile on his face to greet you. He was particularly fond of NASCAR and his favorite driver was Jeff Gordon until his retirement when Chase Elliott became his favorite. He was also a massive fan of the Redskins, Capitals, Orioles, and Liverpool FC. While a man of few words, he was always there to lend a sympathetic ear. John was preceded in death by his mother Barbara Puffenberger, Step-Father Ed Puffenberger, life partner Joan Wilburn, granddaughter Hannah Bailey, and fur baby Gordon. John is survived by his children James Wahl (Marcy Rice) of Lake Wales, Melissa Wahl of Chesapeake Beach, and Tyler Wahl of Maryland, his siblings Kim Logue (R. Craig Logue) of Port St. Lucie, Kevin Wahl of Baltimore, and Kristen Ferro (Andrew) of Mechanicsville; his grandchildren Parker Wahl, Paxton Wahl, Nicholas Rice, Aaron Rice, and Lola Rice of Lake Wales, his great grandchild Antonio Cani of Bradenton, his nephews Adam Powell of Washington DC, Zachary Logue and Nicholas Logue of Port St. Lucie; his father John R. Wahl Sr. (Brenda) of Maryland and a multitude of aunts, uncles, cousins, and friends. Family and friends are invited to Haisley Funeral Home, 3015 Okeechobee Road, Fort Pierce, FL on Saturday May 1st, 2021 at 11 am until 12pm for a gathering of friends and family to reminisce, grieve, and celebrate John’s life. A memorial service will be held from 12pm to 1pm following the gathering. You’ll Never Walk Alone, Pops.

John R. Wahl Jr. of Fort Pierce, FL unexpectedly passed away on Sunday April 18, 2021 at his home in Fort Pierce. John was born February 16, 1962 in Cheverly, Maryland. He spent much of his formative years in Laurel, Maryland before moving... View Obituary & Service Information

The family of John R. Wahl Jr. created this Life Tributes page to make it easy to share your memories.

Send flowers to the Wahl family.