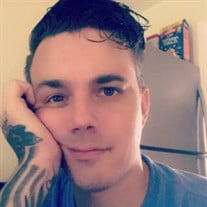 John Joseph Smythe, known to many as Johnny, died at the age of 32 on October 18, 2021 in Port St. Lucie, Florida. Johnny was a blessing to his parents, John and Theresa (Orso) Smythe and his sister, Johanna Smythe. He was the proud uncle of Johanna’s children, Kaden, Liam, and Madeline Hallahan. John was looking forward to meeting his future brother-in-law, Jerad Kasinger and Jerad’s children, Elijah and Noah. He was beloved by his grandparents, Mary Lou and the late Gerald Smythe and the late Joseph and Joyce Orso. He loved his twenty-six aunts and uncles, including his godparents Barb Thibodeau and Patrick Smythe. Having thirty-nine first cousins and a growing number of second cousins, John was proud of his very large extended family and felt great loyalty to them. He was especially loved by his first mother who gave him life, Theresa Addison and by her daughter, Ashley. John grew up in Ferguson, Missouri. He attended Sts. John and James Catholic grade school and graduated from CBC High School in 2008, one year behind his lifelong cousin/best friend, Daniel Sheffner. At the age of 17, he completed basic training for the Missouri Army National Guard and upon his high school graduation he served in a military police unit within the Guard. After his term of service completed, he attended St. Louis Community College and had recently expressed his hope to return to college to pursue his interest in psychology, with the goal of future service to his fellow veterans. John had many talents and gifts. He was a sociable person who enjoyed many and wide-ranging friendships. He will be remembered for making people laugh out loud with his clever wit and antics. He had a wonderful memory for movie lines from the very funny to the very poignant. He had an excellent ear for music and enjoyed most every genre from classical to rap. His talent for cooking was exceptional and he loved demonstrating his skills and trying new ideas. John could clean and fix a weapon and design and build a computer with admirable skill. He was generous in giving time to people who did not have the same ability. John was kind-hearted and open-minded and would not tolerate the opposite from others. Above all things, John saw himself as a soldier. He served with honor and pride and was dedicated to his comrades - veterans, active service members, and police officers. As an avid gamer, he connected with several veteran groups and volunteered in different veteran outreach actions, touching lives in extraordinary ways. John faced some tough personal and health challenges in his adult life. He recognized his need for sobriety and committed himself for the past two years to achieving it. During this same time, John learned he had multiple sclerosis (MS) and in the past several weeks, was doing his best to handle an increasingly serious heart condition. His fighting spirit carried him through so many obstacles and tough times. He never gave up, and he never stopped trying to handle these challenges. And through all of it he still made time to help others. He was a fierce warrior who won his honor and his true freedom. Services in John’s memory will be held in St. Louis, Missouri, at a date to be determined. In lieu of flowers, we ask you to please consider the following ways to honor John: *Help a person in need in whatever way you are able. *Make a contribution in John J. Smythe’s name to one of the following charities: Disabled American Veterans, National Multiple Sclerosis Society, or a charity of your choosing. A Memorial Gathering to Honor the Life of JOHN JOSEPH SMYTHE SATURDAY, NOVEMBER 20, 2021 1:00-5:00 The Savoy Banquet Center 119 S. Florissant Road Ferguson, Missouri 63135 1:00-2:30 Friends 2:30-3:30 Eulogy and Sharing of Memories by Family and Friends (All are Welcome) 3:30-5:00 Family In the interest of providing a healthy environment for all, masks are required and will be available at the front door if needed. We are suggesting two time shifts to encourage smaller groups, but please don’t let the suggested time be a barrier to your attendance.

John Joseph Smythe, known to many as Johnny, died at the age of 32 on October 18, 2021 in Port St. Lucie, Florida. Johnny was a blessing to his parents, John and Theresa (Orso) Smythe and his sister, Johanna Smythe. He was the proud uncle... View Obituary & Service Information

The family of John Joseph Smythe created this Life Tributes page to make it easy to share your memories.

John Joseph Smythe, known to many as Johnny, died at the age...

Send flowers to the Smythe family.