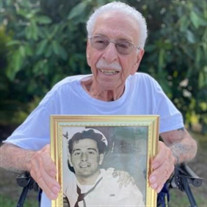 John M. Mascara was born December 23, 1927 in Belle Vernon, Pennsylvania to Eugenia Mascara and Mary Flora Mascara. He passed on August 10, 2021 at home surrounded by his family. Born to and growing up with immigrant parents during the Great Depression was challenging enough. However, with the death of his mother when he was 8 years old and the death of his father when he was 15 years old, John and his 4 brothers faced an uncertain future. Fortunately, an aunt took in all 5 boys and raised them in a loving and caring home. John served his country in the Navy receiving the World War II Victory Medal. Upon his honorable discharge from the Navy he returned to his home town, Belle Vernon, where he joined his younger brother Frank on the semi-professional football team, The Monessen Ravens. The team traveled the Tri-state area of Pennsylvania, Ohio, and West Virginia. A big night at the gate meant a cash payout of $25 for each player. One night after a game in Bentleyville, he met the prettiest farm girl at the volunteer fire department dance. Yes, life was much simpler then. Marrying that farm girl, Sue, on November 11, 1953, they embarked on their lifelong journey. After experiencing a terrible winter in Western Pennsylvania in 1955, they moved to South Florida settling in Hollywood. John worked for a short time for Eastern Airlines before he and his older brother, August, opened up a furniture refinishing shop in Fort Lauderdale. That shop, Broward Furniture Refinishing, became one of the largest and most respected furniture refinishing venues in South Florida. It was common to see interior decorators from Miami to New York City visiting the showroom for ideas and projects. Due to health complications from chemical usage in furniture stripping, John retired from the furniture refinishing business in 1971. However, John’s retirement did not last long. Previous customers sought his furniture finishing expertise and one customer asked him to oversee furniture refinishing operations for an international furniture company. That offer resulted in John and his family moving to Costa Rica where he traveled through Central America to train and supervise a new generation of furniture refinishers. After retiring again from the furniture refinishing business in 1975, John and his family moved to Port St. Lucie where he and his wife embarked on a journey of entrepreneurship in St. Lucie County. He and Sue opened up one of the first true Italian delicatessens in Port St. Lucie, The Deli Shack, which brought customers from all over the Treasure Coast to sample real Italian food. At the same time, John and Sue opened up the first ever teen center in St. Lucie County, The Library, where hundreds of teens visited every weekend. John and Sue developed relationships with those teens which lasted a lifetime. John cherished the opportunity to mentor young adults, especially introducing them to the business side of operations. After retiring again, John started a mobile furniture refinishing shop which was utilized by every major furniture outlet in South Florida. After finally hanging up his brushes at age 73, he concentrated his time on bowling and becoming the “sign master” for political campaigns. Of course, he was most proud of making and putting out more Mascara for Sheriff signs than any candidate had ever done. With a group of close friends, it was common to see the “sign squad” out at all hours of the night and then enjoying breakfast at local 24-hour restaurants. John never met a stranger, and it was common for him to befriend all other candidates and their “sign squads” and all meet up for breakfast and political talk. John loved God, this country and the opportunities that were afforded to him to succeed, spending time with his family, the Pittsburgh Steelers, and Sunday family Italian dinners. John wanted to thank the superior staff at Trilogy Home Health Care who cared for him during his illness, Nancy who became part of our family, and his loving granddaughter Brittany who was his primary caregiver the past 9 months during his illness. John was predeceased by his parents; brothers Gene, August, Tom, and Frank; and his loving wife Sue. He is survived by his son Ken; grandson Michael; granddaughter Brittany; and great granddaughter Eloise. A private ceremony will be scheduled in the future. In lieu of flowers, contributions can be made to St. Lucie Catholic Church and/or The Florida Sheriffs Youth Ranches in his honor.

John M. Mascara was born December 23, 1927 in Belle Vernon, Pennsylvania to Eugenia Mascara and Mary Flora Mascara. He passed on August 10, 2021 at home surrounded by his family. Born to and growing up with immigrant parents during the Great... View Obituary & Service Information

The family of John M. Mascara created this Life Tributes page to make it easy to share your memories.

Send flowers to the Mascara family.