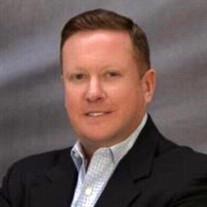 Jeffrey Charles Metro, age 47, of Jupiter, Florida passed away on October 22, 2021. Beloved son of Tony and Claire (Supple) Metro and brother to Jennie (Jay) Hagstrom, Julie (Rob) Haugen, and Jake Metro. Much-loved uncle to Brad and Molly Hagstrom and Madison, Payton, and Brooklyn Haugen. Jeff was born in Madison, WI on August 31, 1974. Jeff attended Madison Edgewood High School where he was part of back to back State Championship teams in golf and hockey, and then Sault Area High School in MI. He then earned a bachelor's degree in advertising from University of Wisconsin - Eau Claire where he was a four year letter winner in hockey. Jeff's love for hockey and golf continued throughout his life. He was a Business Development Manager at Mar-bal Inc. In his free time, he loved to golf, spend time with his family and friends, and watch his favorite sport teams on tv. To know Jeff was to share in his kind heart, his smile, and his laughter. Jeff also leaves behind a host of aunts, uncles, cousins, and friends to keep his spirit and laugher in their hearts. Jeff was preceded into death by his grandparents, Charlie & Rita Supple and AJ & Martha (Vi) Metro and his uncle Max Metro. A memorial mass will be held on Saturday, November 20th, 2021 at 1:00 pm at St Dominic Catholic Church, 18255 W Capitol Dr, Brookfield, WI. In lieu of flowers, please donate to a charity of your choice in Jeff’s memory.

The family of Jeffrey C Metro created this Life Tributes page to make it easy to share your memories.

Send flowers to the Metro family.