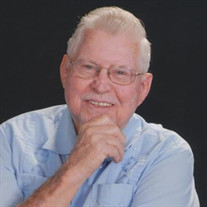 Jay H Tucker III, a 6th generation Floridian, was born in the same hospital as his father, Jesse Hezekiah Tucker, in Sarasota, Florida on August 16, 1938. Jay transitioned from this life into eternity early Friday morning, May 7, 2021 in Ft. Pierce, Florida where he, and the love of his life, Joanne, raised their four children. He is survived by his wife of almost 64 years, Joanne Elizabeth Santrock Tucker, of Ft. Pierce; his sister, JoAnn Burns and husband Larry, of Delta, Colorado; his four children, Tracy and wife Denise, of Jacksonville, Florida, Craig and wife Melody, of Jamesville, North Carolina, Penny Worley and husband Mark of Ft. Pierce, Florida, and Jeslyn Snider and husband Jeff of Palm City, Florida. Jay is also survived by ten grandchildren: Bethany, Mandy, Kristy, Philip, Kent, Sarah, Brittany, Allison, Weston, Ani, and nineteen great grandchildren. Married as high school sweethearts, Jay served his country in the US Navy and then he and Joanne moved with their infant son, Tracy, to Iowa where Jay studied to become a telegraph operator for the railroad. Later, after changing trades to become an electrical lineman, the family, now also including Craig, Penny and Jeslyn, moved to Ft. Pierce where they would live until he and Joanne became empty nesters, grandparents and even great grandparents. Jay coached little league baseball for Tracy and Craig (even though he didn’t have the slightest idea what he was doing). He and Joanne worked very diligently as Band Parents for all four children for about a decade. Regardless of where they lived, Jay served the Lord faithfully in the local church they attended, working in various areas such as church boards and committees, children’s ministry, bus ministry, repairing church A/C systems, running sound/lighting booth and filled in anywhere he was needed. However, in recent years, Jay’s real ministry passion was for the Jesus Film Harvest Partners. If you were to ask Jay about how he lived his life, his answer would always be, “God first, Joanne second, family third and everything else after that.” Jay’s memorial service will be held this Saturday, May 15th, at 11am at GRACE Emmanuel Church, 707Kitterman Road in Port Saint Lucie. In lieu of flowers the family requests that any donations be made to Jesus Film Harvest Partners (jfhp.org) or Treasure Coast Hospice (https://treasurehealth.org/292/Donate).

Jay H Tucker III, a 6th generation Floridian, was born in the same hospital as his father, Jesse Hezekiah Tucker, in Sarasota, Florida on August 16, 1938. Jay transitioned from this life into eternity early Friday morning, May 7, 2021 in Ft.... View Obituary & Service Information

The family of Jay H. Tucker, III created this Life Tributes page to make it easy to share your memories.

Jay H Tucker III, a 6th generation Floridian, was born in the...