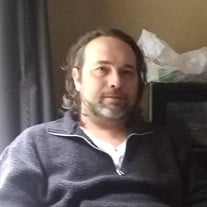 Jason L. Schmidt was born on August 17, 1981. He lived to be 39 years old, passing away on April 23, 2021. Jason was born in Florida. He graduated from Fort Pierce Central High School and was dual enrolled at Indian River Community College where he achieved an A.S degree in Engineering. Jason’s expertise was in drafting and design. Jason was self-employed as a Civil Engineer. Jason played Little League Baseball for 8 years with his Grandfather and Mother as coaches. At the age of 2 years old he started riding three-wheelers with his mother. By the age of 4 he was riding on his own around the yard. That was the start of his love for cross county motor-cross riding. He also enjoyed BMX trick riding, skateboarding, and surfing. But Jason’s true passion was for music which became his lifetime hobby. He started playing the guitar at the age of 15 and learned to play many other instruments as well. As a young adult he helped form a band that advanced into playing many local night clubs, including some on Clematis street in West Palm. Meeting Jason was a main event, and you knew your life would never be the same again. Jason had a smile that could lighten the darkest rooms, and a heart that could warm the coldest nights. As a young adult, it was never hard for him to make friends. He was fierce, never letting friends go through hard times alone, and striving to push everyone to be their best self. Never afraid of friendly competition, Jason strove for excellence in everything he did. Never inactive, sports and martial arts helped Jason to focus his energy into daily projects, like building trails through the woods, making bike ramps, and getting his friends to keep up with his desired pace. With a lust for life, Jason loved to try new things, travel the country, and was passionate about the need for higher education. Jason attended Fort Pierce Central High School, while doing dual enrollment at Indian River Community College. Jason had a knack for drafting and design. Shortly after finishing his degree, Jason began to shape the world with his amazing projects. Many office buildings, shopping malls, entertainment venues, and expensive homes in South Florida were scaled, measured, and put to paper by his brilliant mind. First working for Karner Surveying in Palm City, Jason also worked with Caufield and Wheeler Inc, main office in Boca Raton, with a satellite office in Port St. Lucie. The legend of Jason really started the moment he picked up a guitar. Whenever he played, you could feel it in your soul. His band life began in Revolution, started by childhood friends, Chuck Cumberland, and Daniel Gilbert. Most notable mention is the band Elementary, which lit up the rock scene and gave the biggest names of the time a run for their money. Elementary made it to Buzz Bake Sale and rocked the side stage for Battle of the Bands. His final band was played with another set of childhood friends, Foster North sharing lead guitar, Between Us All, began getting shows at venues all over the Treasure Coast. Once the band life was over, he began making music at home. First moving to the bass guitar, he quickly picked up drums, keyboard, and began writing songs, and performing vocals. Epica, Jason’s at home band, made a few singles and are saved today in loving memory. Jason never lost his zeal for American Muscle cars and racing. If it had wheels, Jason was on it. And if it had a motor, he raced it! Jason built a few cars over the years, best known for the black Firebird neighborhood kids dubbed “The Nightrider”! Instrumentations on the dash did not work, and you did not know how fast you were going, yet Jason’s prowess in any vehicle is what made him legendary, and you felt the thrill while in safe, loving hands! Even though a die-hard Chevrolet fan, Jason went euro when he purchased an Infiniti G35 last year. He loved how fast it was and worked on making it fly! The legend of Jason Schmidt is a book with no ending. Jason was loved by many, cherished by all he impacted in this world. Jason has left the deed of telling his story through the voices of this cherished friends; Noelle DeMauro, Nikki Lewis, and Seth Roberts. Jason would say, “Do not cry for me my friends, for I am whole, happy, and free. Protect, love and honor each other, until we meet again!” Jason was dedicated to his close family and friends. He leaves behind to them his smile and wit whose lives will be touched for a long time to come. Together, as one we say back: Goodbye may seem forever; farewell is like the end. But in our hearts, we have our memories. And there you will always be! A Gathering will be held on Saturday, May 22, 2021 from 1PM to 2PM with a Memorial Service to begin at 2PM at the Haisley Tribute Center 2041 SW Bayshore Blvd Port St. Lucie, FL 34984.

Jason L. Schmidt was born on August 17, 1981. He lived to be 39 years old, passing away on April 23, 2021. Jason was born in Florida. He graduated from Fort Pierce Central High School and was dual enrolled at Indian River Community College... View Obituary & Service Information

The family of Jason L. Schmidt created this Life Tributes page to make it easy to share your memories.

Send flowers to the Schmidt family.